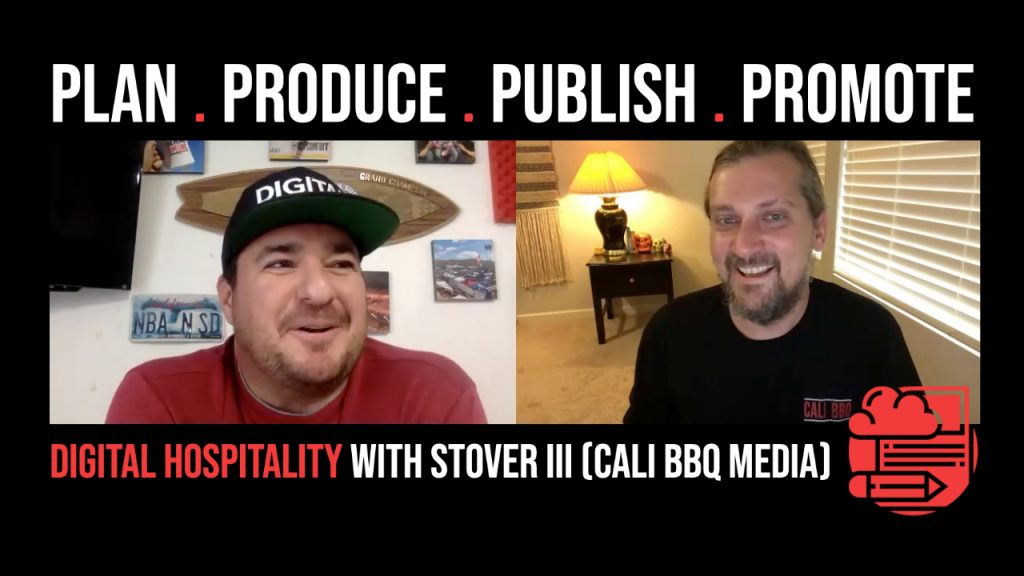 Stover E. Harger III is telling brand stories — and so should you.

To be successful at anything, you have to know your “Why.” For Stover Harger III, content publisher and digital strategist for Cali BBQ Media (and producer of this very podcast Digital Hospitality), his “Why” as a content creator has always been simple: “Any good reporter really just wants to help the world with information.” 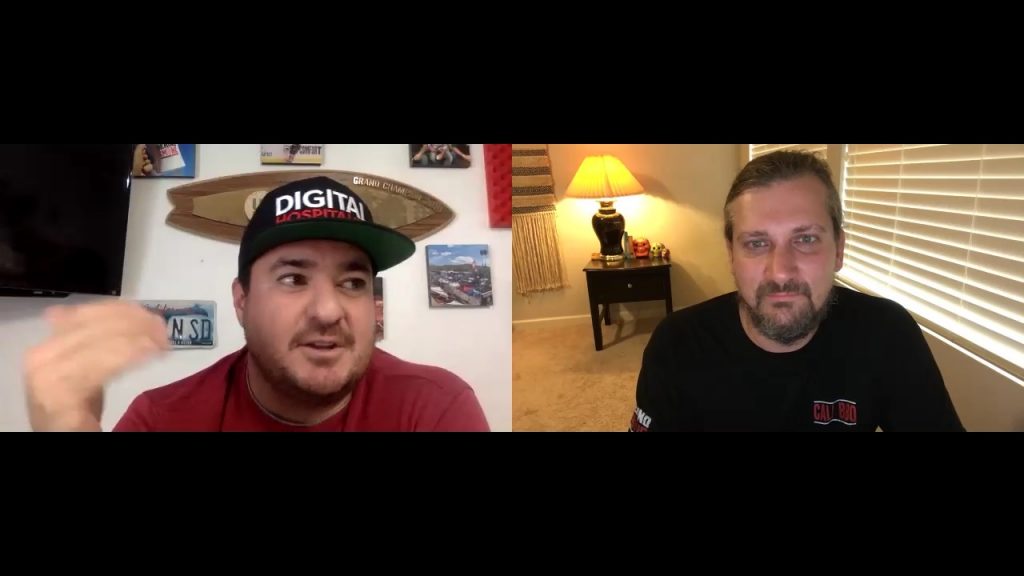 An industry veteran, category creator, and all-around story-telling multi-hyphenate, Stover got his start in print while studying journalism at college in the 2000s. While Stover was honing his craft as a writer, reporter, and editor, the newspaper business he entered would soon become the one he’d be leaving.

“As I rose in the industry, I saw the industry collapse,” Stover looks back. “So here I was wanting to have a future in something that everyone was jumping off of.”

Just how did he know?

“My own parents stopped subscribing to the newspaper halfway through my run at a newspaper,” laughs content producer Stover Harger.

“That was an indicator I should’ve listened to. When your own parents, the generation before you, stopped actually paying for a thing that pays your bills? Yeah, it’s time to get out.”

The pivot for Stover was podcasting – more specifically BBQ podcasting. Using audio as a medium rather than writing was unconventional based on his background. Still, his confidence was unfazed.

“We called it the Best Barbecue Show,” Stover reflects on the first podcast creation with his Glencliff Media production company that he created during his time living in Austin, Texas. “Neither of us had any experience doing podcasts. We wanted to do it as a test to see if we could make a popular show in a genre that we didn’t really know that much about.”

Meatman Stover talks to the TV news about what is a Meatman. A fun flashback recorded from the start of the huge line at @franklinbbq in 2017. Did you watch when this was being broadcast live? Remember the puppets?

Picking the title and topic off SEO insight, something strange happened.

“It started to work!” Stover recalls the early fanfare for his BBQ podcast. “I was like, ‘Wow, I have an audience for that.’ I mean, I’d worked at a daily newspaper that had hundreds of thousands of readers and I never felt that people were connecting with me until I had a barbecue podcast with only a thousand listeners.” 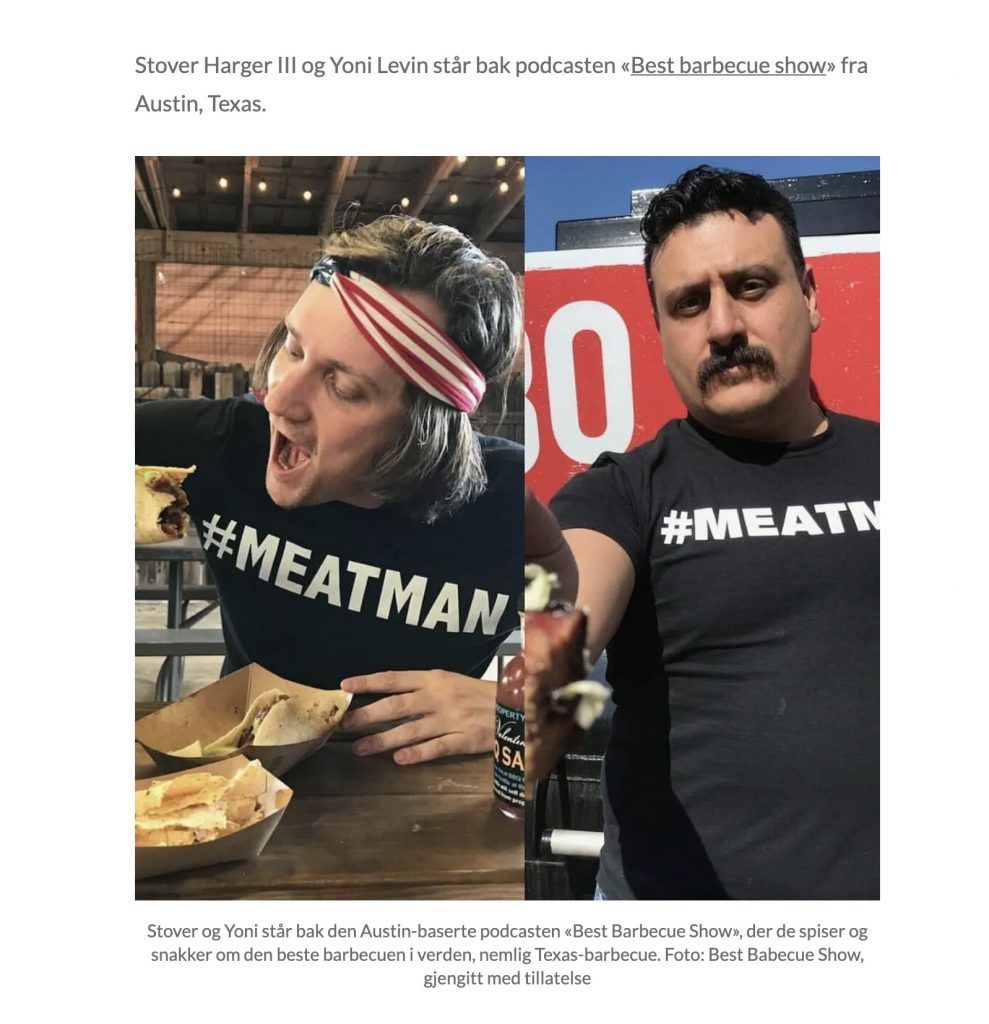 Stover’s BBQ expertise and knowledge of the modern business world has led him to being featured on television, numerous podcasts like The BBQ Central Show, industry articles and more, including an appearance in Playboy magazine.

Eventually Stover left the Best BBQ Show in order to move onto bigger and better things for his career in digital media and the barbecue industry. Yoni Levin still hosts the Best BBQ Show from Austin as of 2020. The show is published much less frequently now and has a different format than when it was produced by Stover during his time hosting the Texas barbecue podcast with Yoni in Austin. 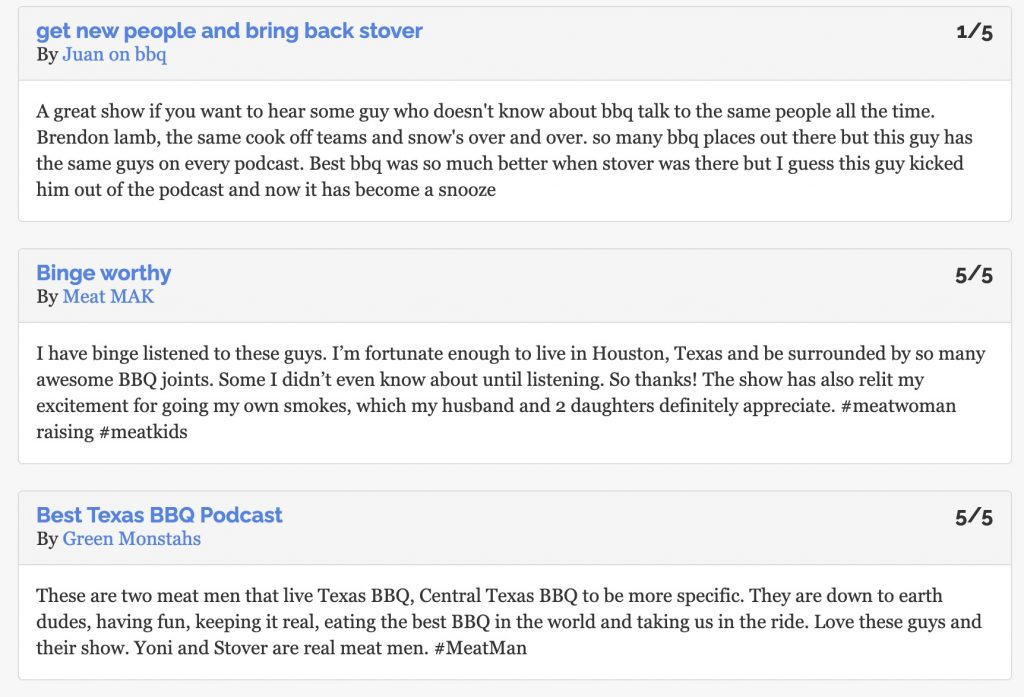 Entering, and to some degree creating, the BBQ digital content space, Stover’s path led him to a fruitful friendship that’s still cooking today. Linking with our own Shawn Walchef, then host of the Behind the Smoke Podcast, the two would blaze a trail for the Digital Hospitality world we live in today.

“I met Shawn years ago doing the barbecue podcast,” Stover says on his Cali BBQ/Digital Hospitality content collaborator. “We connected, both thinking that we were the only ones doing ‘the game within the game.’ I was watching him, he was watching me, and neither of us really knew that. We connected like a lot of people do these days on Instagram and then the relationship just didn’t stop.” 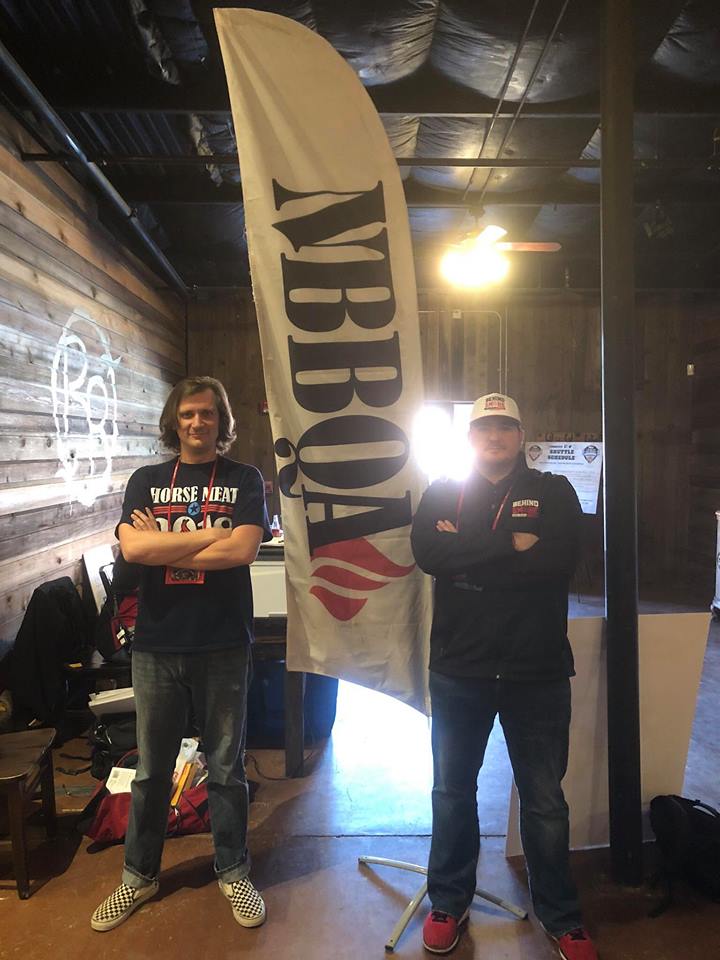 As alluded, the online, and then offline, friendship between Shawn and Stover led to creating what you’re reading and listening to right now: The Digital Hospitality Podcast as featured on the Cali BBQ Blog.

Creating content with BBQ veterans like Meathead to media mavens like Lisa Ann, Shawn and Stover’s curiosity in cooking ribs, running a business and evolving digitally has led them to many epic conversations and strong stories. 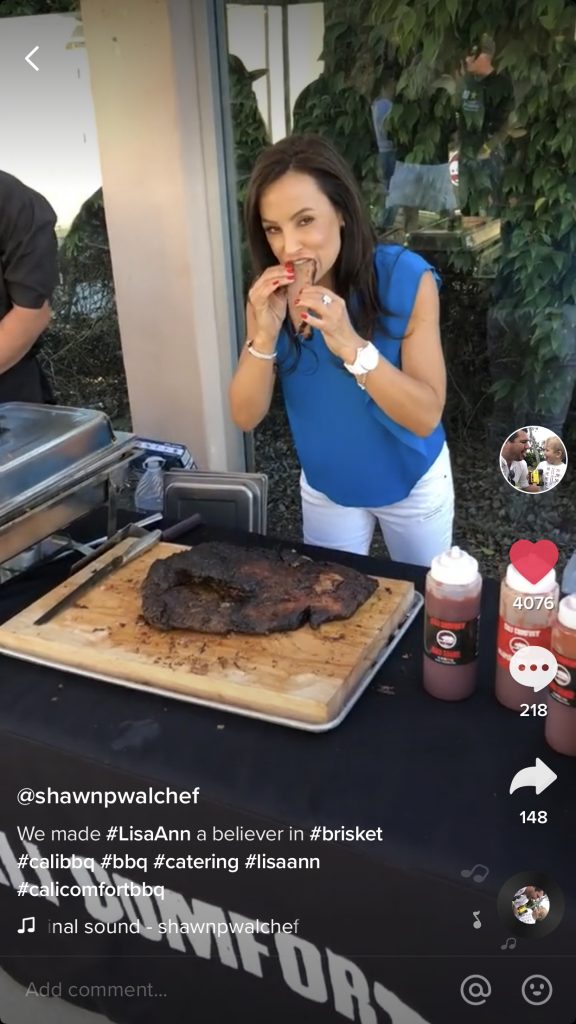 “One of the basic lessons and skills that I took in my time as a reporter and editor is that you can find stories anywhere,” shares Stover.

“When you’re searching for that piece of content for your audience you have to really look at yourself and see what it is that interests you.”

Everyone Should Tell Stories Online:

While Stover’s prophetic pivot and social media connection with Shawn has led to his long running success, he’s certain the next wave of digital storytellers can write their own narrative professionally by doing so creatively for the wide range of businesses out there.

Why? Because every business should be a media company.

“You have an ability that is valuable,” Stover tells fellow and future writers. “You, the storyteller, you the journalism major, you the English major. You can find a business that’s in desperate need of a storyteller just by going on their website and trying to figure out what they do. Create your own job. Don’t wait for it to come to you. Don’t look for a posting because what we’re doing now doesn’t exist technically.”

He has the right to make a strong statement like that. After all, how many BBQ content publishers do you know personally?

Well, at least one now. Nevertheless, there weren’t any postings for the title he holds now.

“That’s the beauty of the Internet in this digital world,” said Stover, known online as the BBQ Hunk. 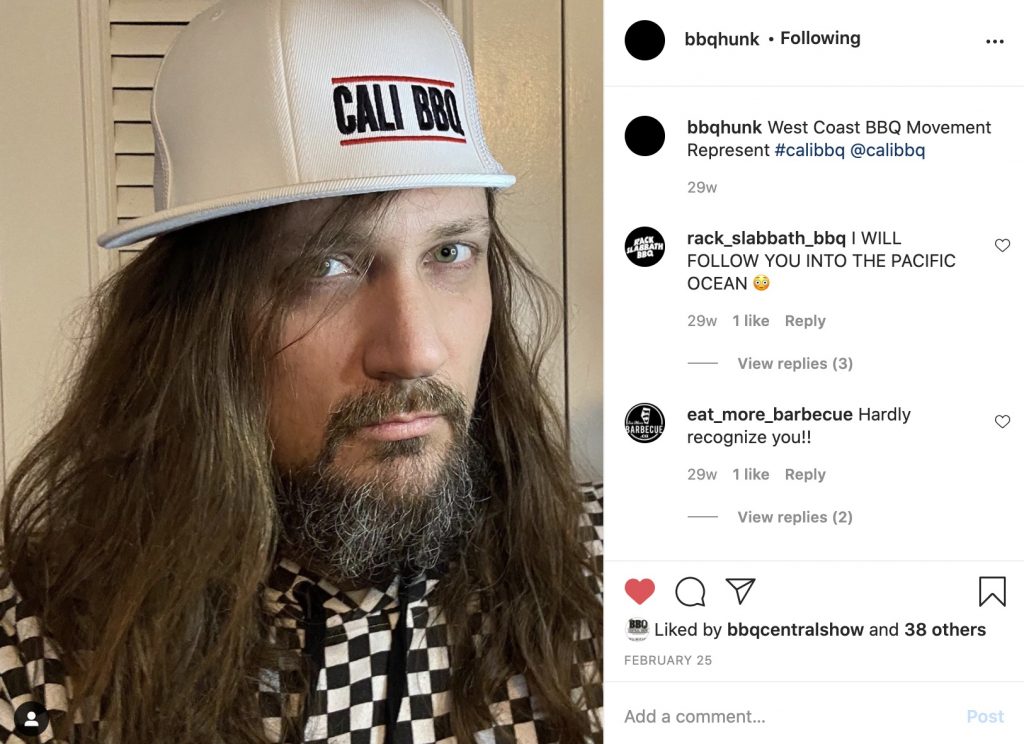 “It’s not all done yet, so you have to make up your job title. In fact, job titles, I would say, don’t even exist anymore. You have to figure out what you do and what you love and then find a way to make money on that online. For a reporter, that’s telling other people’s stories.”

Historically, telling other people’s stories would mean working for a newspaper or a magazine. In 2020, every person and every brand has a story. For Stover, tapping into the industry side of storytelling is an opportunity every aspiring writer should pursue.

“Let’s say you love a company,” Stover starts. “And you look on the company’s website and you could do a better job of telling their story. Then tell their story and send it to the CEO. I mean, you’ll see how far you can get if you actually proactively go on LinkedIn and add everybody from that company and show them how much you know about their business. You’ll be able to make your own job.”

For Stover, the Digital Hospitality proof is in the pudding, or better yet the Wicked Peach Cobbler.

Working with Shawn at Cali BBQ, Stover has been able to dive deeper into the BBQ content category he helped create with another forward-thinking ally. Just the same, Shawn’s curiosity and networking skills have allowed the Digital Hospitality podcast and Cali BBQ Media blog tell the story for not just restaurants, but brands like Yelp, Cloudbeds, FORGED, Toast, and countless others.

The combination of a veteran reporter and a restaurant owner has created the perfect recipe for creating and marketing content.

Cali BBQ Media wants to simplify the Internet and content creation by focusing on the core fundamentals of being a content producer and publisher.

Think of content in terms of a high level when you’re making your plan to publish and promote the content you produce. Think of content as ViThere’s Video. There’s Audio. There’s Images. There’s Words. Once you look at the process in a simplified way, a whole new world of potential opens up.

Once you go through that content cycle, it’s time to start again. That could mean with a completely new piece of content — or a clip or segment of another piece of previously published content.

The Smartphone Changed the World:

With the advent of the smartphone, working as a reporter has changed drastically for Stover since his days of writing for the newspaper.

Still, his why hasn’t changed.

“That’s the content cycle,” Stover says on the evolution of media and the Digital Hospitality Podcast’s Four Ps. “I know for a fact anyone listening to this podcast wants to learn.”

After all these years, Stover III is still helping the world get their information. He’s just doing it more dynamically than ever before.

Lucky for us and lucky for you, Stover is on our team.

One of the hunkiest of all the BBQ Hunks is @calicomfortbbq. Click the link in my bio to check out his podcast @bbqwarstories ?? Shawn is leading the charge of the growing West Coast BBQ Movement and killing it in Southern California. ⠀ #bbqhunk #calicomfort #behindthesmoke #bbq #meatman

— Article by Ian Stonebrook, content producer for Cali BBQ Media. Get in touch and learn more about Ian at www.instagram.com/ianstonebrook