The Advantage of Knowing Nothing | Glenn Parker (Sports Industry) | DH049 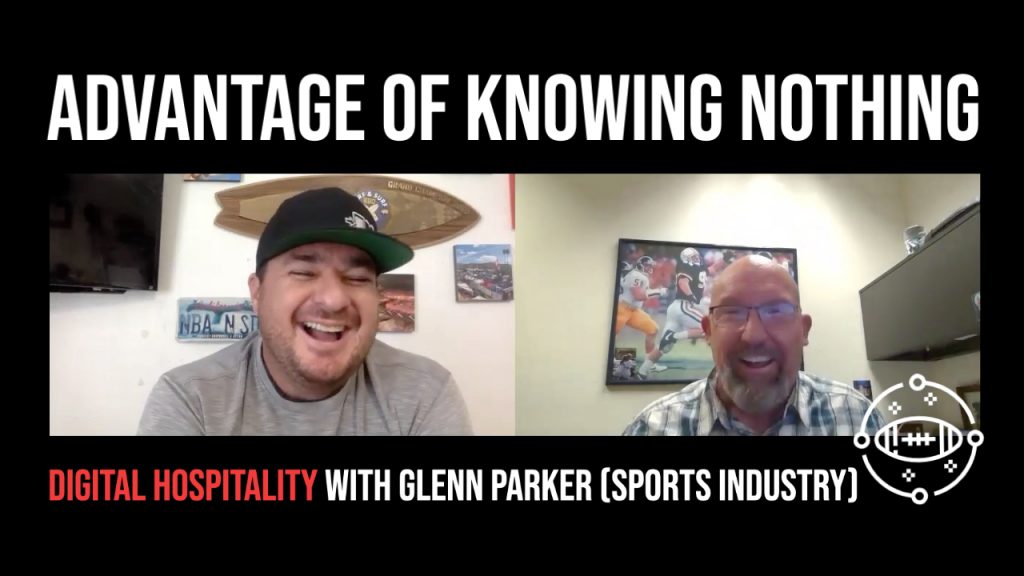 YOU and your ideas can be featured on the Digital Hospitality podcast. All you have to do is send us your best advice, strategies, tech tips, and other information to podcast@calibbq.media.

When you send us an Instagram message, a note on Facebook, a Podcast Review, or however you want to get in touch, it helps us grow our Digital Hospitality mission.

Cali BBQ Media strives to help small businesses survive — and thrive — in 2020 and beyond. Visit https://calibbq.media online to learn more about our business and lives. 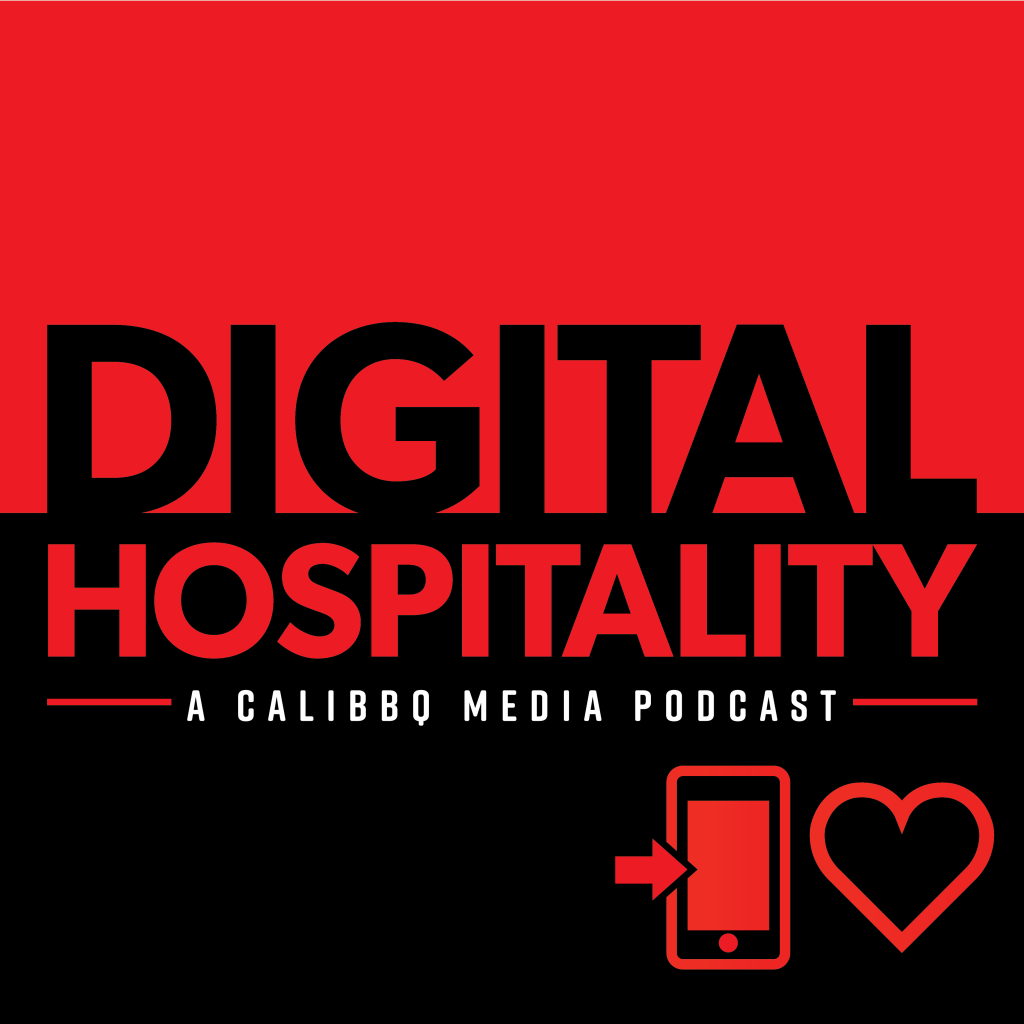 Quotes from this episode:

Some Kernels Pop Later: [00:04:23] If you have a handful of popcorn, you shake it. Not every kernel pops at the same time. Some pop early and burn out. A whole bunch pop all about the same time. And a few pop right at the end. I was one of those last little kernels to pop. Everybody kind of popped and I was kind of pudgy and short and immature and I just wasn’t ready to play.

Don’t Assume Anything: [00:13:12] Great teachers start at the beginning and don’t assume their student knows anything. They don’t assume anything. So it’s up to the student to say, I know nothing. It’s also up to the teacher to understand that this kid might have played a lot of football. This kid might have been a great line cook at another restaurant, but he knows nothing about what we do and the reasons we do it.

Look for the Positive: [00:31:51] You can’t dwell on it, you know. That’s it. It’s like dwelling on a bug that’s flattened on the front of your Lamborghini. Don’t you want to dwell on the Lamborghini? You know, it’s a scratch. It’s nothing. Move on. People make too much of a body of work that isn’t near perfect when it’s that close. And I have too many good memories to let that happen.

The Value of Sports: [00:42:06] You want your kids exposed to as many sports as possible because you learn so many things from your coaches that you might never learn in the classroom. You learn the camaraderie. You learn how to hustle. You learn to be on time. There’s so many different things that are the value of sports.

Glenn Parker has a resume and story few can match.

Spotted playing pickup basketball during his days as a bouncer, the 6-foot 5 athletic man was a late-bloomer just having fun and getting some exercise. To a nearby football coach, Glenn Parker was destined to hit the gridiron even if he’d never played a down in high school.

The rest? Well as they say it was history.

“I went to the Super Bowl my first four years in the NFL,” says the mountain of a man who’s now retired from both bouncing and playing football.

Glenn Parker was a guest on the Digital Hospitality podcast where he talked with host Shawn Walchef about his fascinating history in the sports industry, career evolution, and his growth mindset.

Learning the game of football in junior college and rising in the ranks as a prospect at the University of Arizona, Glenn’s lack of knowledge of the Xs and Os paved the way for how he’d absorb information for the rest of his life.

“The blank slate is everything,” Glenn says of having a growth mindset. “I can’t stress that enough to people. When entering a new situation, do away with the ‘I knows’ and ‘I gotchas’ and ask the ‘Whys’ and the ‘How comes.’ Tell people right off the bat, ‘I know nothing. Treat me like I know nothing.’”

By saying that he knew nothing, Glenn really knew something it would prove.

Playing pro football for over a decade and reaching the Super Bowl five times, Glenn Parker started 141 or 174 career games. Still, he always entered training camp as if he was on the hot seat. Over the course of his career, Glenn’s humility and curiosity would both fuel his work ethic and ultimately lead to longevity in an incredibly competitive industry.

“Every year they bring in some guy who’s going to beat you out,” Glenn reflects on his NFL career and training camp competition. “I would find out, ‘Okay, what’s this guy really good at?’ And I’d work with him on that. I would try to get myself up to his level on [his strength]. Almost never do they look at me and say, ‘What are you really good at?’ And try to get that from me.”

“So, I was sapping their time from them to get better. And they weren’t doing the same for me because I would have gladly helped them, but they didn’t do that. That allowed me many times to take a guy who everyone swore was going to take my job and by middle camp he’s gone.” 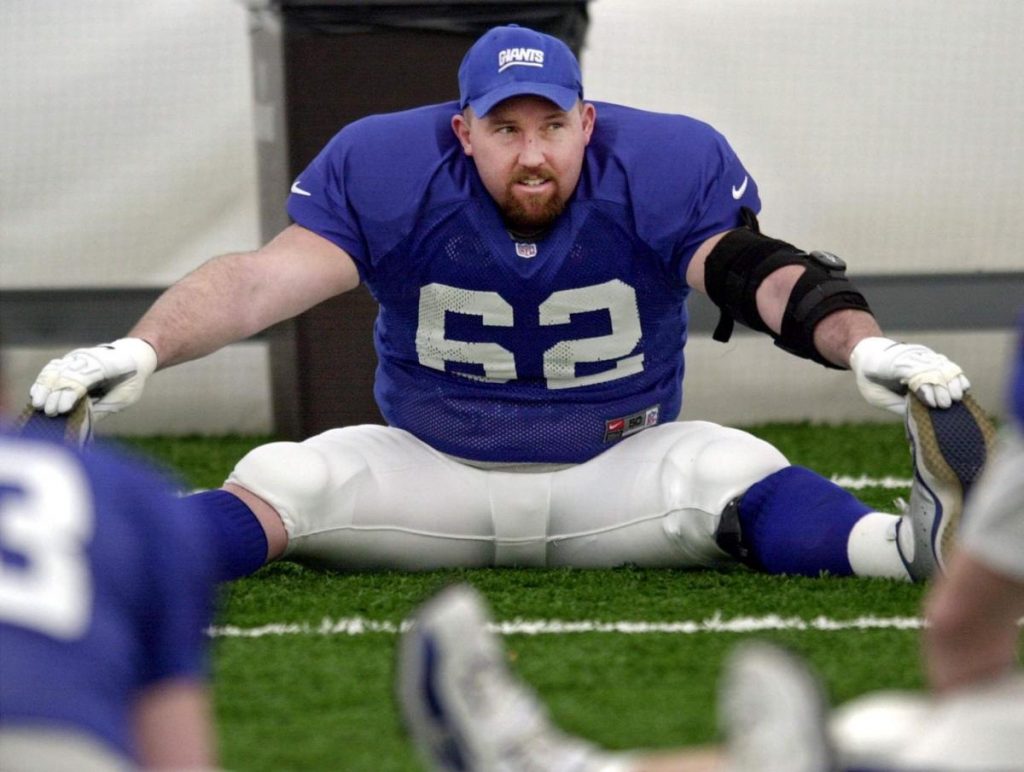 By being curious and vulnerable enough to ask a newcomer what they were good at and learn from them, Glenn continued to improve upon his weaknesses and keep a job on the team.

Whether learning new skills from a rookie or going through the playbook with his teammates, Glenn Parker always brought an attention to detail and focus in his practice habits.

“I needed to work on something purposeful every rep I got,” recalls Glenn Parker on the Digital Hospitality podcast. “Why are we doing this drill? What mindful purpose can I have to get better during that drill? That is how teams tighten their belts, how they get better, how they get streamlined and how they win a lot of games. I learned that firsthand that 1990 season with that no huddle attack. We had problems for a week or so then we flipped the switch. From there on out, we were unstoppable.”

Over the course of his career, Glenn would lean into learning and practice mindfully during his years with the Buffalo Bills, Kansas City Chiefs and New York Giants.

When it was all said and done, Glenn played in five Super Bowls.

“That is the lowest of the low,” Glenn says on losing his last Super Bowl with the Giants and realizing his run was coming to an end.

With all those brushes with success and heartbreaking losses on the world’s biggest stage, you’d think Glenn would be sour.

Wrong. That same growth mindset that propelled him as a player propels him as a person just the same. 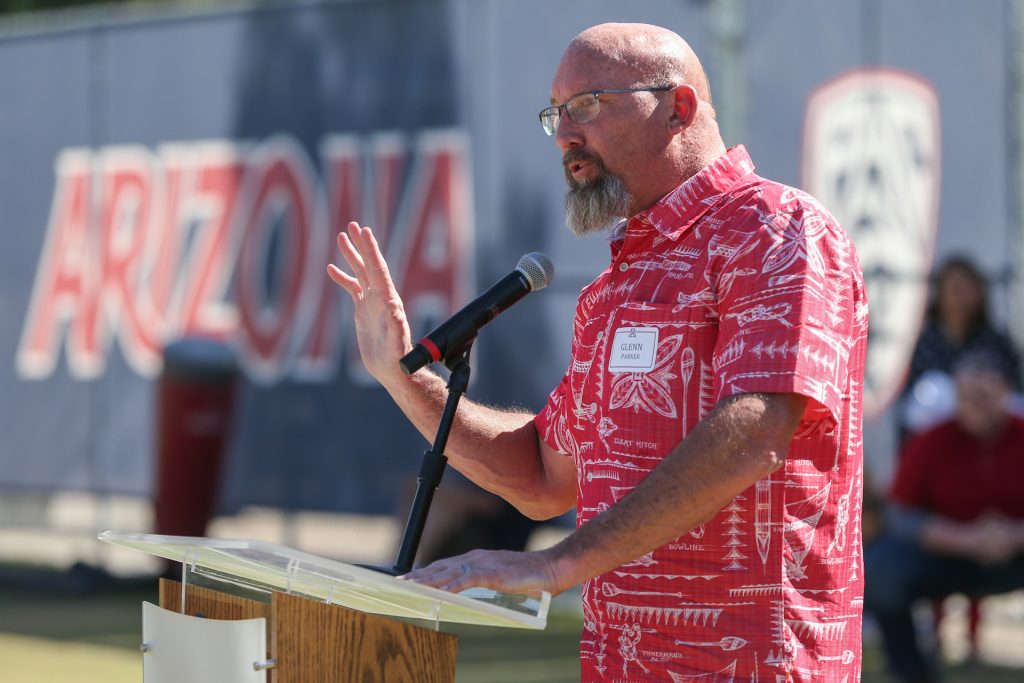 “I was given the opportunity to be around great players,” Glenn says of his career. “All those good times will never be outweighed by the fact we lost the game. The fact is, 31 teams every year don’t make it. So why should the person who comes in second feel worse than the guy who came in last?”

Glenn’s grind during his playing days left him with plenty of gratitude in retirement.

His humility and growth mindset set the stage for his next act.

“I prepared myself for 12 years for that transition,” Glenn says on retiring from playing in the NFL. “That’s the fear being cut every day: you better have something else going.”

For Glenn, that something else was broadcasting. While playing on the offensive line is more pain than fame, being in the booth proved a road filled with learning and grinding just the same.

“At Buffalo, I did a radio show,” Glenn recalls on an early commentary gig. “You’re sitting on a foldout table in the chip aisle and giving an autograph. That’s not glamorous. That’s not the big time. In Kansas City, we’d call a high school football game for free on cable.” 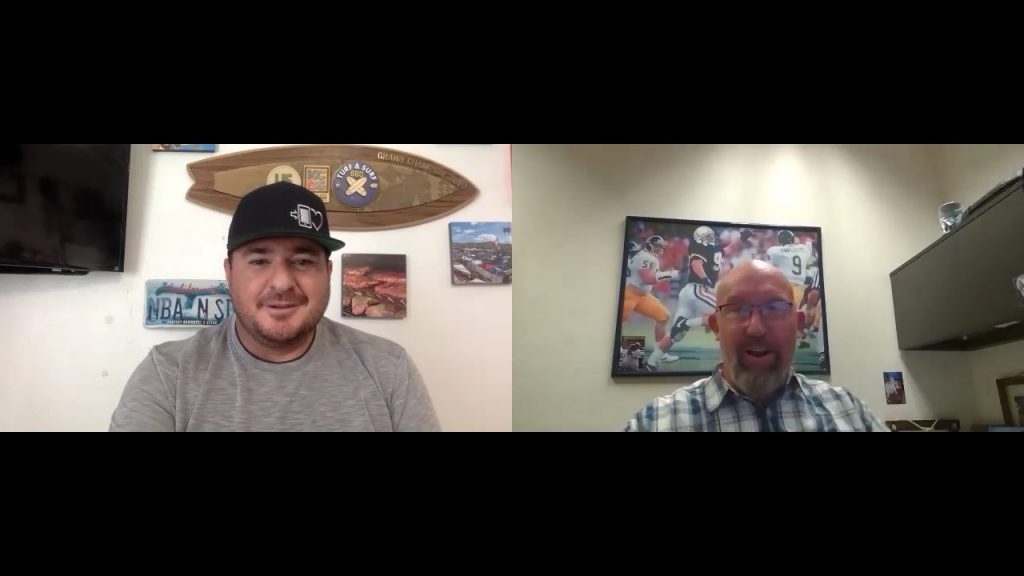 Once again, humble beginnings for Glenn but a growth mindset just the same.

While Glenn Parker wasn’t getting big checks or glamorous perks in his early days of broadcasting, the mindful reps in Buffalo and Kansas City would later lead to work for The NFL Network, ESPN, CBS, NBC and the Pac-12 Network.

Landing back in Tucson, AZ where his college career took off, Glenn is now shaping his next act with the same humility and growth mindset that took him from bar bouncer to NFL vet. 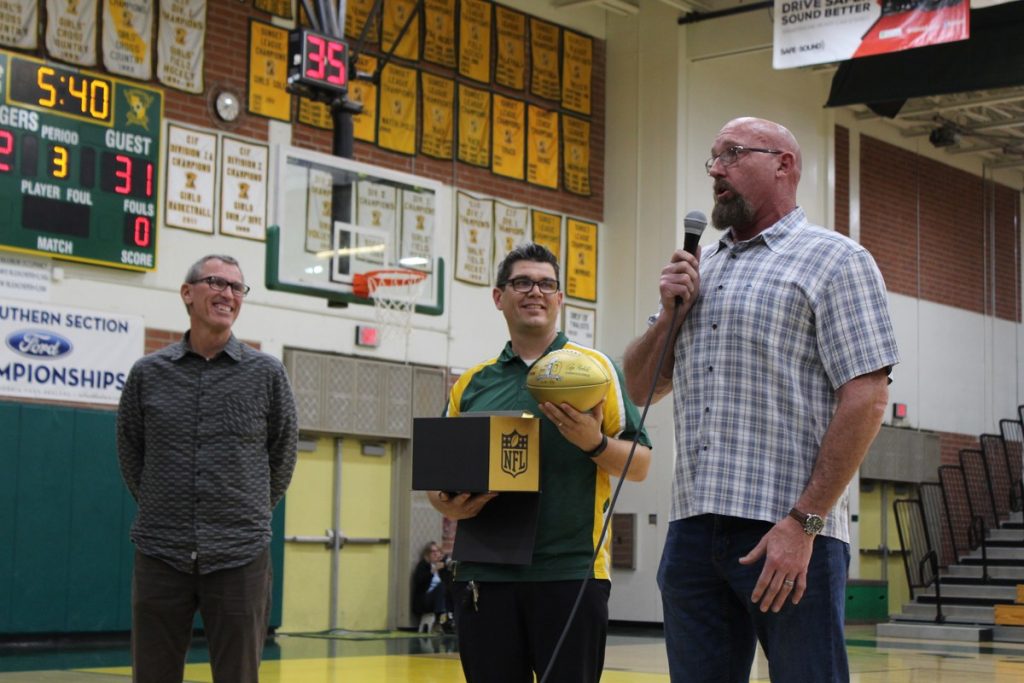 “I plan on starting my own podcast where it’s about uplifting messages,” Glenn shares. “It’s not just the sports world. I have so many people I know outside of sports guys that are federal agents that have written books to Navy SEALs. Not every message has to be the same, but within the vein that it’s uplifting. It’s about how do we make ourselves better human beings, better men and better fathers?”

If Glenn can repeat in podcasting what he’s done in football and broadcasting, all listeners are in for a treat.

Still, it will be Glenn listening to those that know more about the podcasting platform that will inform his success.

“There’s very few overnight successes in life,” Glenn Parker acknowledges. “I prepared myself very, very hard and I worked on my weaknesses every year. I set up my schedule in the broadcast world like a football schedule.

“In the offseason I got to work on these things for the coming season and then week to week you game plan. That’s how I was able to do that for 15 or 16 years before I transitioned.”

So, if Glenn Parker reaches out to you to ask about podcasting, best believe he’ll be turning one of your strengths into one of his, too. Just be humble enough to ask to learn something back from him.

Get in touch with our Digital Hospitality team at https://www.calibbq.media or email podcast@calibbq.media and let us know how we can help you.

Thank you for subscribing to our podcast on your favorite player and signing up for our email newsletters online at https://mailchi.mp/calibbq/emailupdates.