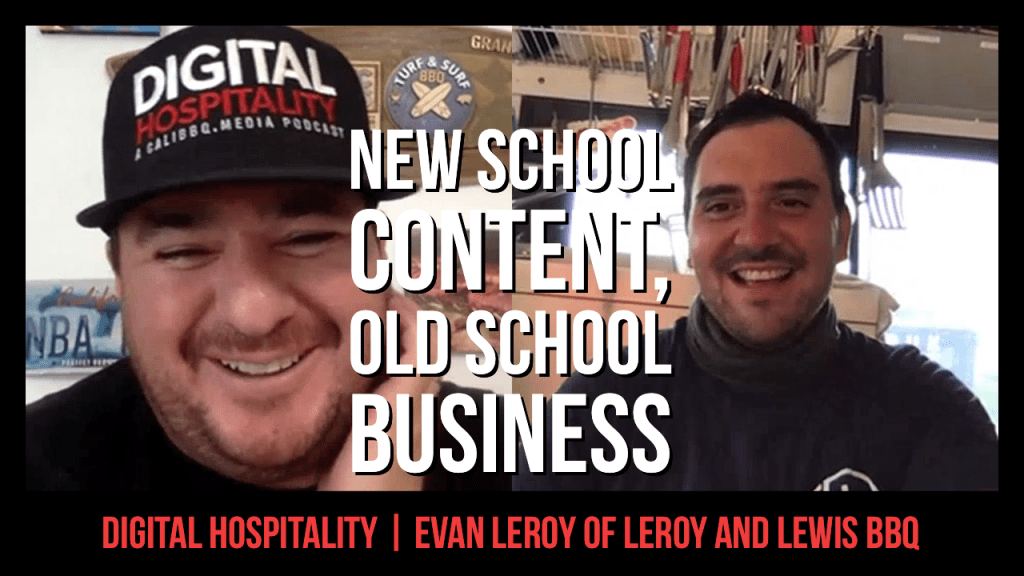 Located deep in the heart of Texas, Evan LeRoy and his team at LeRoy and Lewis BBQ bring together two of Austin’s culinary calling cards with unparalleled New School creativity. 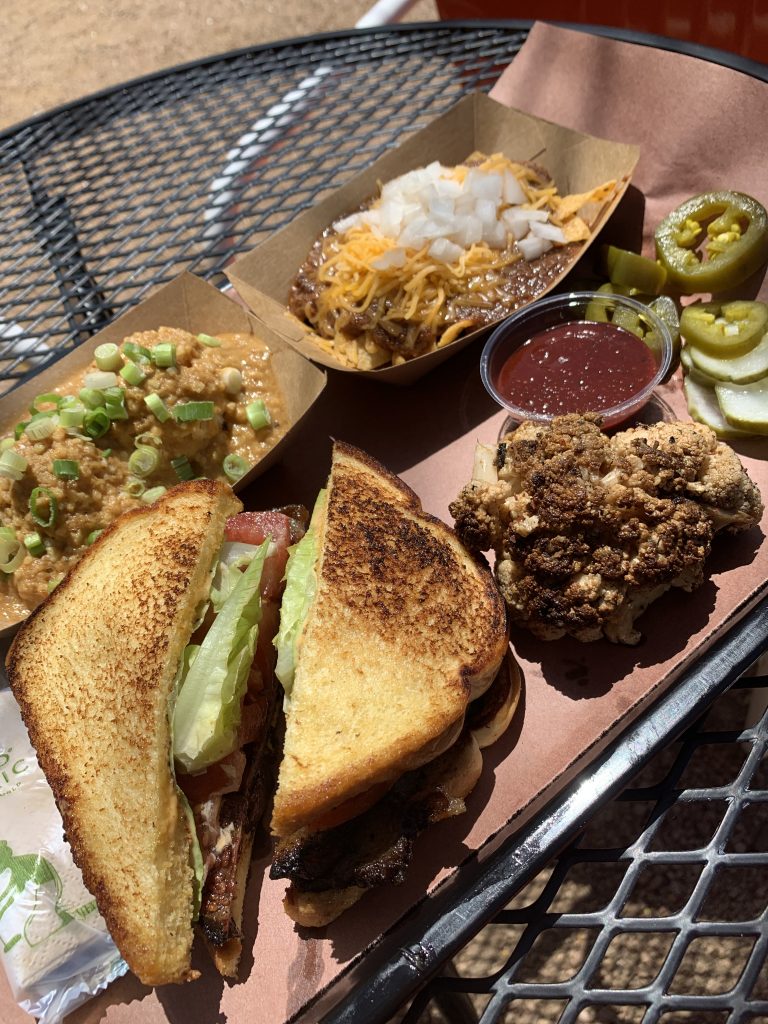 Co-owning and operating LeRoy and Lewis BBQ by Cosmic Coffee’s open, eclectic and awesome beer garden, the pitmaster and chef is offering a premium blend of innovation and heritage on Austin’s favorite food genre through his own lens.

From the Jowl Bacon BLT to the Pork Hash and Rice, Evan LeRoy and his team are breaking boundaries on what’s considered barbecue by maximizing every ounce of meat they locally source. 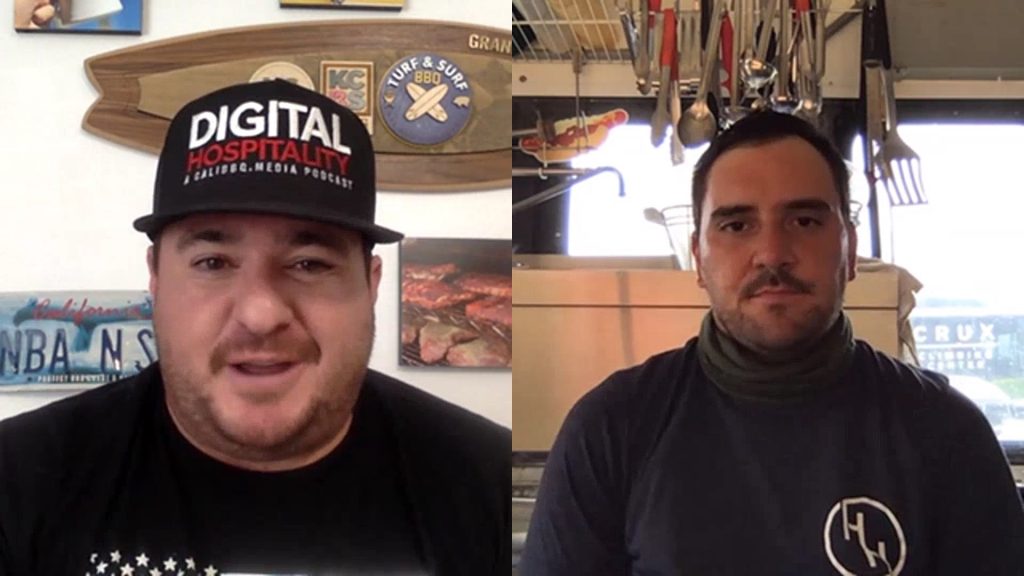 Currently killing it at Cosmic Coffee, where a wide array of world class food trucks transforms the beer garden into the most eclectic of outdoor settings, aspirations of a brick and mortar restaurant are still in the works.

Like all of us, Evan and his team have seen their world rocked by the current pandemic. Like the best of us, Evan is using this time to adapt and grow.

“In the wake of all this kind of COVID craziness, we’re trying to increase our online presence,” says Evan LeRoy.

“I rebuilt our website, I started a podcast and we started this video series where we’re releasing instructional barbecue videos on Patreon. I’m trying to get our name out there, trying to use the marketing tools and just get better at telling our own story.”

Standing Out Online and Off:

It’s important to stand out when operating a business online and off. 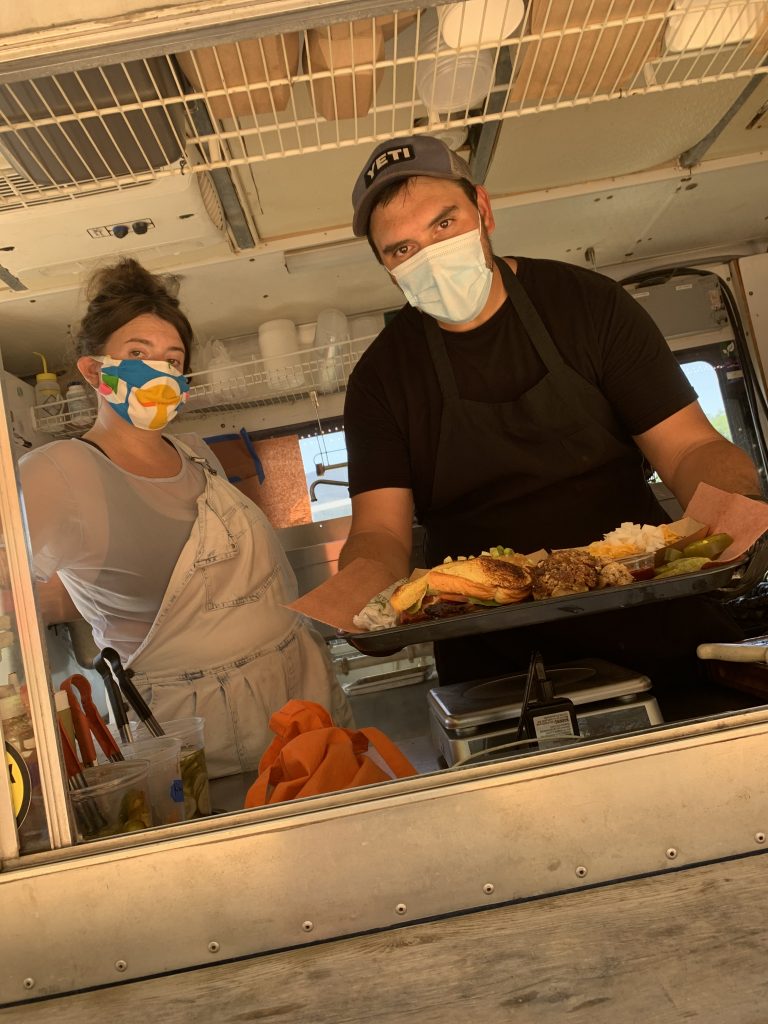 “In the barbecue space right now, you have to make sure that you have a point of view,” says Evan LeRoy. “Especially in Texas or in Austin. What is the point of having just another barbecue restaurant? Why would you just open up another brisket, ribs and potato salad joint?”

To Evan, differentiating LeRoy and Lewis from the rich, classic and contemporary BBQ scene in the city he calls home was essential.

“You have to have a unique point of view,” as Evan puts it. “Everything we do is informed by sourcing. We source all of our meat locally and that’s the most important thing to me. Everything starts here by sourcing, locally, responsibly, sustainably.” 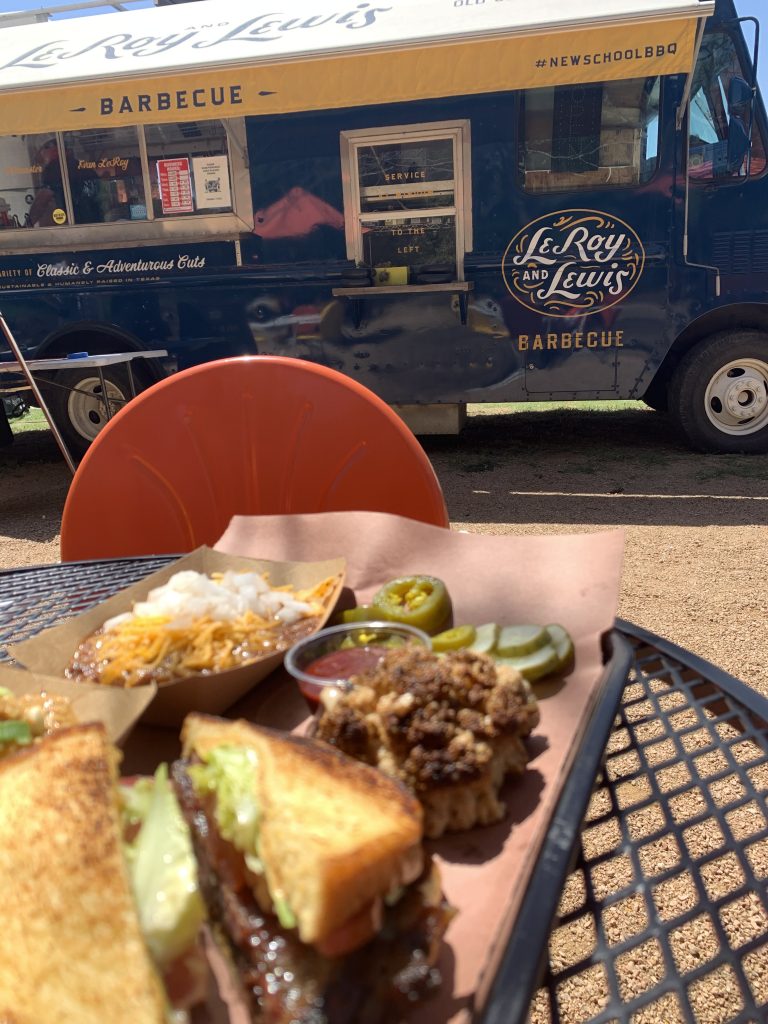 While sourcing locally and sustainably may prove most profound ethically, it’s proved just as delicious in practice. Making the most of all they source, cuts of meat that often go unused or wasted instead become the building blocks of some of LeRoy and Lewis’ most savory and creative dishes.

While the BBQ is New School, the great service from the passionate LeRoy and Lewis team remains comfortably Old School.

Telling Your Own Story:

For most restaurateurs, telling your own story is a dream. For Evan LeRoy, it’s a reality based on his background. 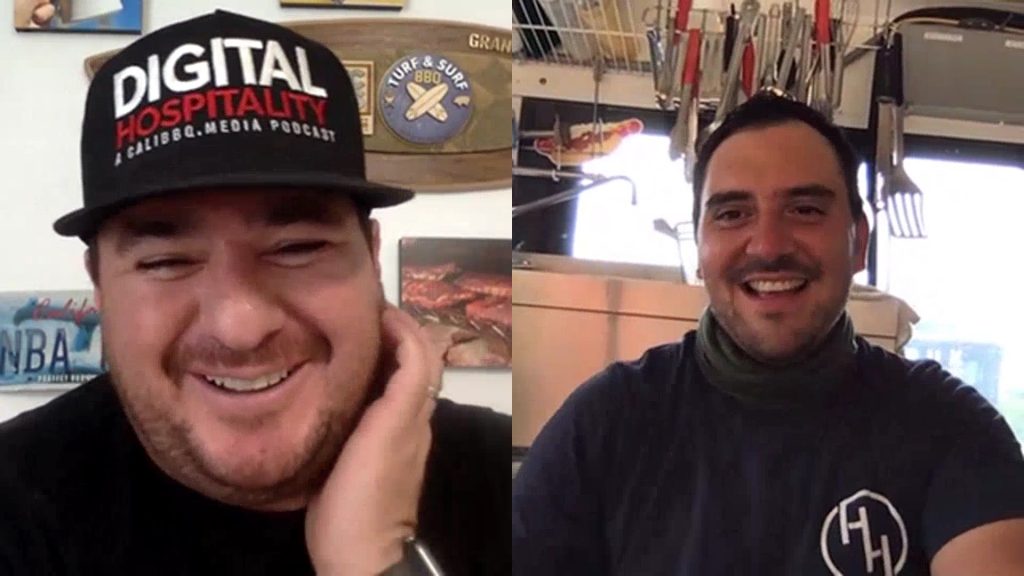 Attending Florida State University in the mid-2000s to purse his passion of film, Evan ended up cooking while at school and electing a creative major that’s still helping him today.

“I have a writing degree,” says Evan. “That’s what I graduated from Florida State with. What I wanted to do initially was be a food writer. I went to New York and that was the idea.”

For better or for worse, timing had other plans.

“It was 2008 and there just weren’t any editorial jobs,” Evan looks back. “As it turned out I was pretty good at cooking.”

Pretty good has since turned into really good when it comes to cooking. It’s also improved his perspective as an author.

“I realized that at that time I didn’t have anything to say with my writing,” reflects Evan. “But now, 10 years later, I have cultivated a food point of view. I have enough things that I can say and have enough viewpoints that I feel strongly about that I can put out there and defend.” 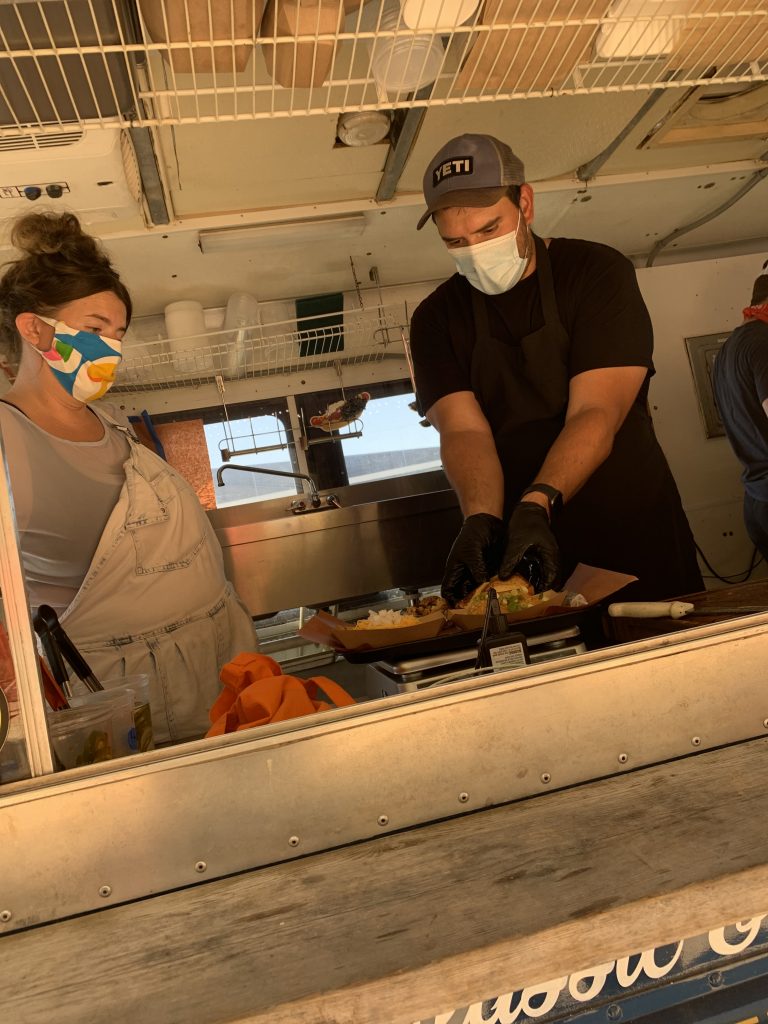 In recent times, Evan has taken to Medium to share his viewpoints on COVID-19 as a cook and owner from how LeRoy and Lewis are keeping employees safe to why they are open to the public. All the articles are honest and solution oriented. As Evan alluded to, one of the main solutions for LeRoy and Lewis during the pandemic is creating content.

“We really want to be content creators,” states Evan on himself and his team. “Just having our ideas out there, that will alone drive people to the food truck.”

On Patreon, many fans of LeRoy and Lewis and BBQ pay $30/month for access to original how-to cooking videos and more educational content from the New School BBQ crew.

From in-house tantalizing content on social and Medium to collaborative instructional videos, Evan’s writing and window into his food truck has amassed interest in Austin and beyond.

“We had an Eater video come out that was about 15 minutes long,” Evan tells us. “It was really well produced and edited. It came out in the middle of April and it has over a million a half views on YouTube. That really exposed us to a new audience.”

That Eater audience has led both Texans and tourists to LeRoy and Lewis to see what New School BBQ is all about.

“That was something that really kind of pushed us into a new stratosphere,” Evan says of the Eater video.

“I can’t imagine how busy it would have been if we weren’t under lockdown at that time. It would have been much busier here, but we still got a good amount of people coming and getting to go just from that video.”

“I saw COVID-19 happening,” Evan says looking back at the early parts of 2020. “I was like, ‘Everybody is going to be online and that’s the way that we need to reach out and connect to people.’” 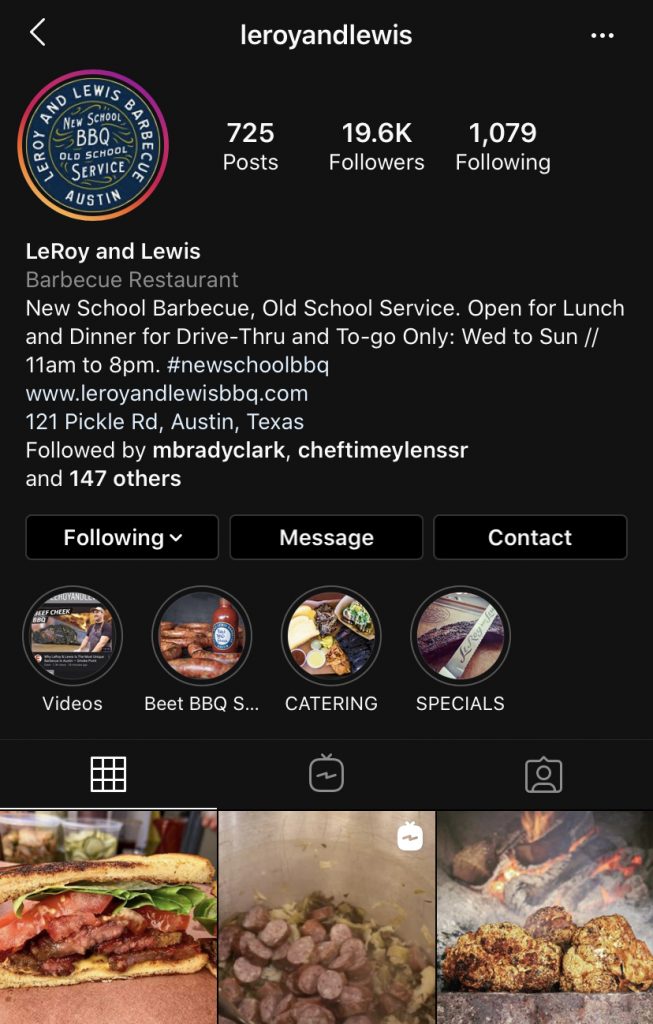 Reach out and connect he has.

“We’re most active on Instagram,” notes Evan on LeRoy and Lewis’ digital presence. For reference, @leroyandlewis on IG boasts a 19.6K following with a feed full of mouthwatering plate pics and on-site story posts.

On top of that, Evan uses his own social handles to push content, ideas and engage in conversations.

“I am @evanleroybbq on Instagram and at @evanleroy on Twitter,” says Evan LeRoy who tells us he’s added items like Cauliflower Burnt Ends to his menu based off conversations online. 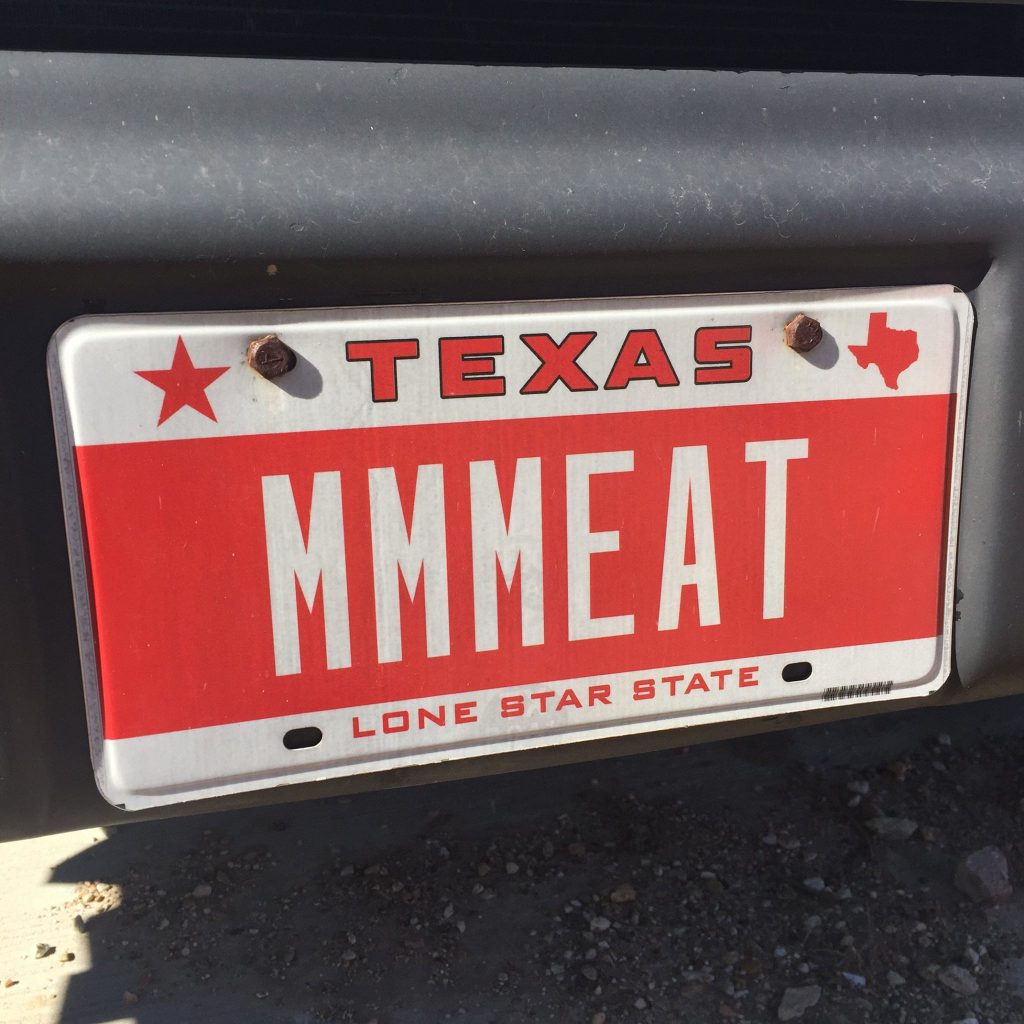 While creating content and engaging in online discourse is a must for all brands in 2020, the likes, shares and ideas don’t always show up in the stat sheet. As Evan puts it, creating content online is not about direct ROI but rather about raising your brand’s profile.

So, from cooking to creating content, how does one man do all this alone?

He doesn’t. Like any other success story, Evan works hard and so does his team. 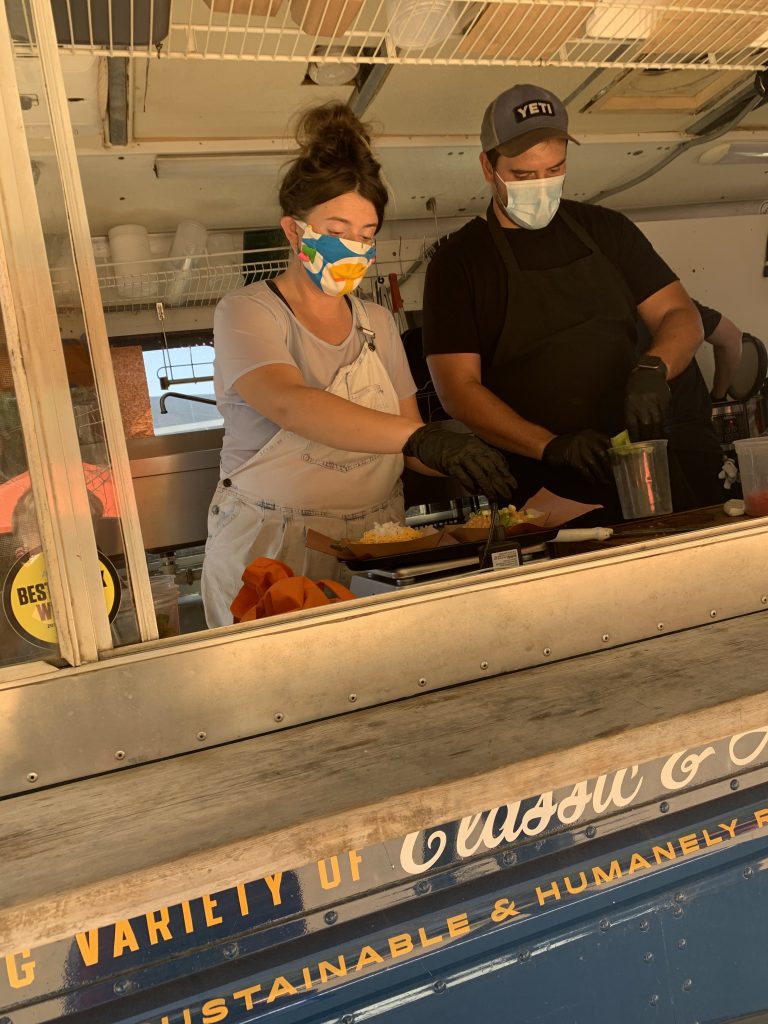 “I kind of make all the menu decisions,” Evan LeRoy said. “My wife, Lindsey, does public relations and outward facing communication.”

Evan and Lindsey make up the LeRoy side. Next up, the Lewis family. 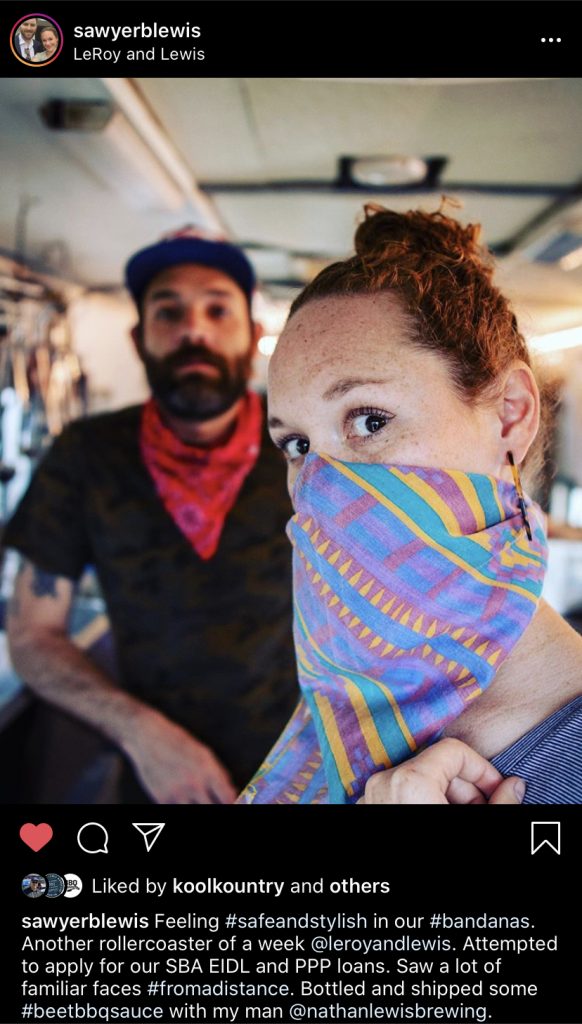 “Sawyer Lewis is my business partner,” shares Evan. “She does everything except cook the food. Making the schedules, making sure all the money works, keeping us on budget and really doing all the legwork like putting together our brick and mortar proposals and things like that. Her husband Nathan Lewis is the head quality engineer for Austin Beer Works. He helps out a lot with spreadsheets, numbers and doing any extra work we need to on the truck. We recently started bottling our barbecue sauce and he’s been heading that up.”

With two LeRoys and two Lewises, the work is shared and so are the wins.

“We were really trying to treat our business partnership like it’s a marriage,” says Evan. “We’re in this together. The more I benefit, the more you benefit. We’re trying to lift each other up and do the work that we do for the benefit of the entire team.”

The team makes it all possible and stretches far beyond the two families of the restaurant’s namesake. 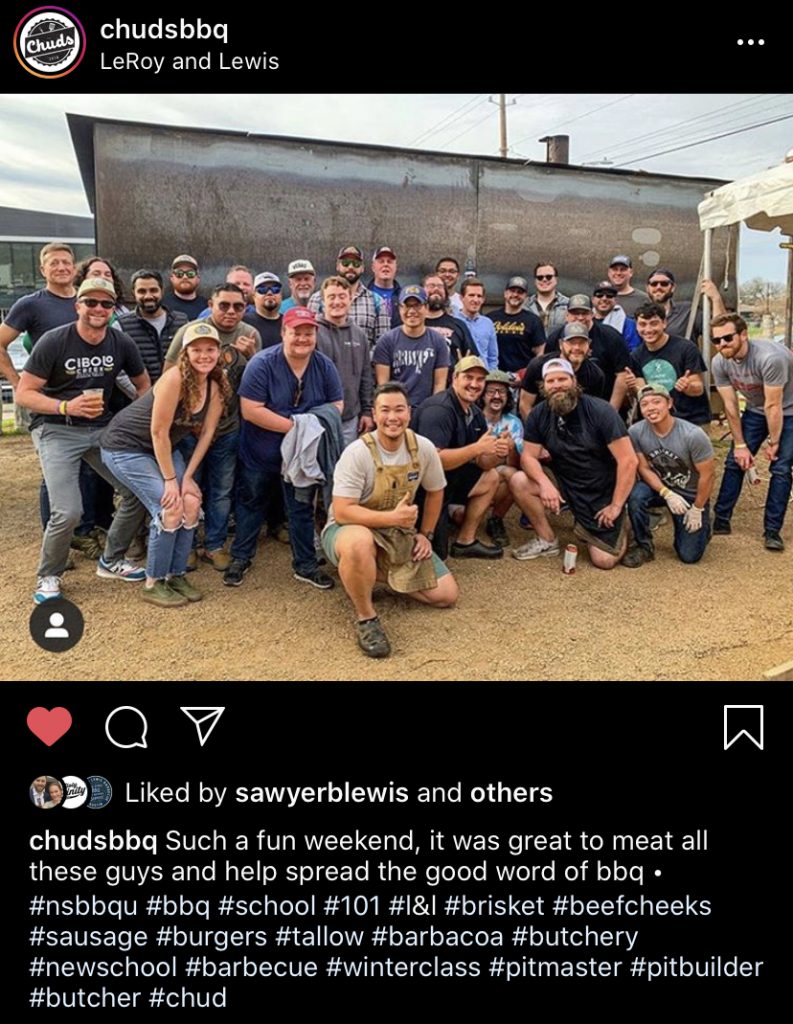 “You’ve got to make sure that you have people you can rely on and you’ve got it,” Evan says of his team. “We have Brad Robinson, Good Old Chud. He does our pit building and a bunch of our butchery. He’s kind of like my right-hand man, my number two guy. Then we have Clayton Cook, who’s kind of like Sawyer’s number two. He also does some cooking and he has worked in the industry for a long time.” 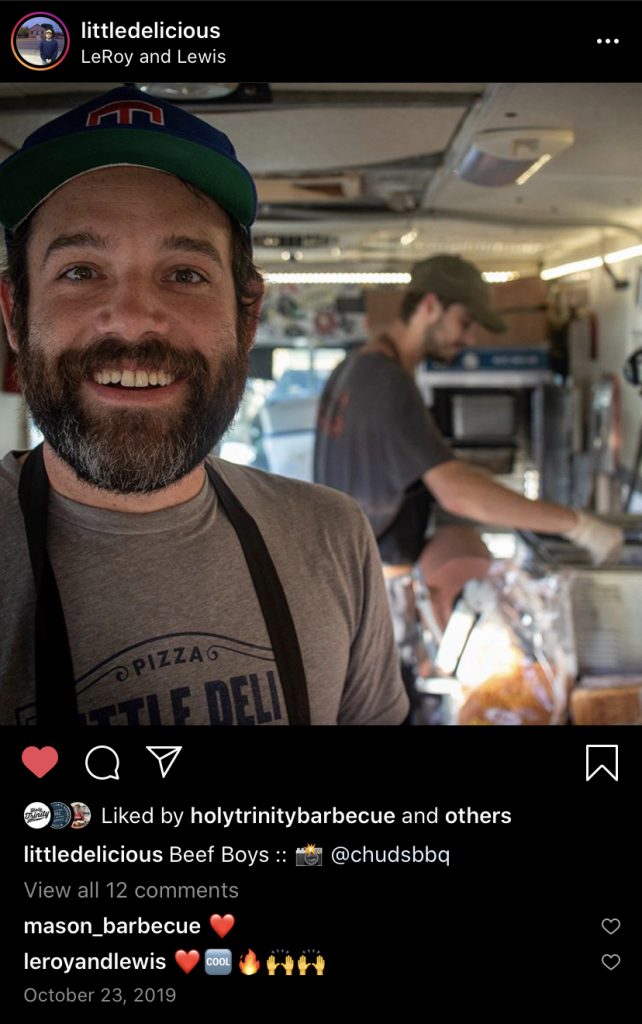 As times change, the team remains the core of LeRoy and Lewis. Because of the team’s reliability, Evan has been able to respond to the pandemic with a pivot.

“When COVID happened, we moved the food truck outside the fence and turned it into a drive thru,” recalls Evan. “We did online preorders, call orders, and we were a drive thru so people could come up, order and get their food the same way. They just didn’t have to get out of their car.” 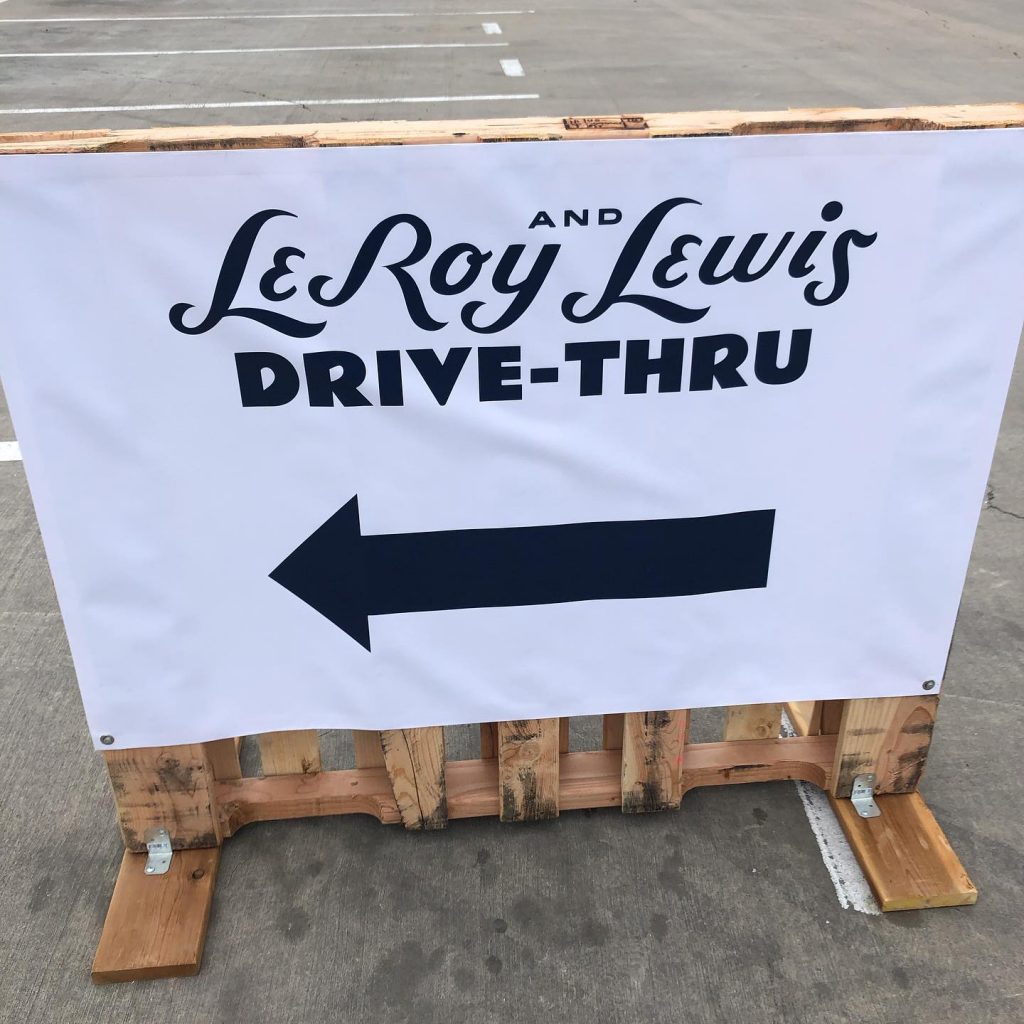 This of course was a major change for the New School BBQ spot built off Old School Service.

“You order, we plate it and cut it right in front of you,” Evan says of the standard ordering process. “Then we give it to you directly.”

However, adversity breeds creativity. Evan LeRoy and his team are already seeing new ways of business and redefined customer behavior based on the changes.

“This idea that you don’t have to go and wait in line somewhere,” Evan said. “I think that is going to be one of the things that permeates this entire crisis. I think that’s something that’s going to stick around obviously with curbside. But mostly, I think this next phase of our business is this online.”

For Evan LeRoy, that online BBQ business begins with their brand-new website. 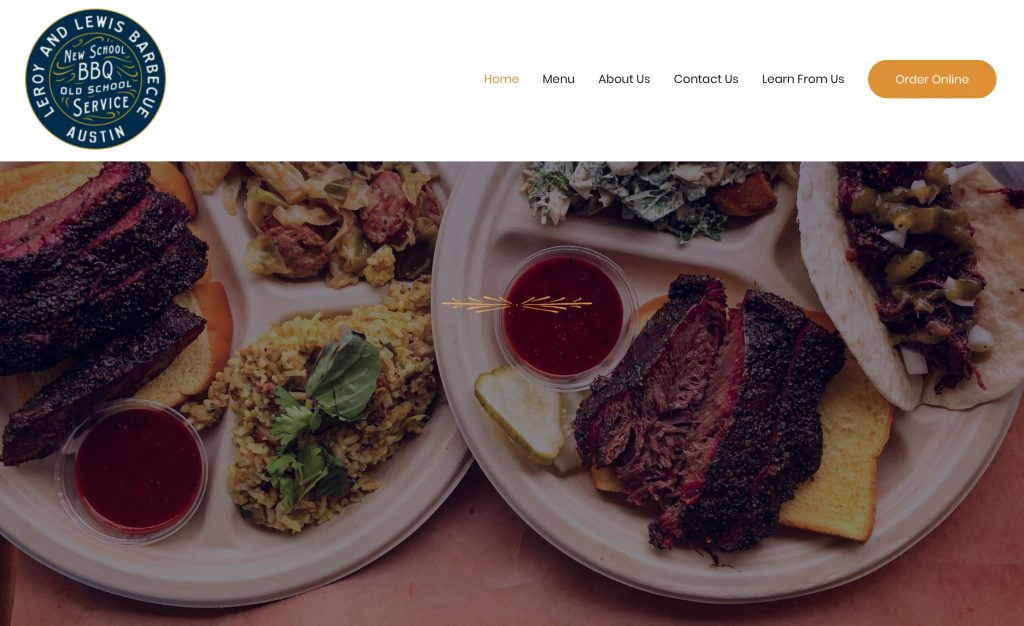 “We have a new website that I built, LeRoyandLewisBBQ.com,” Evan shares. “You can go to our entire online store with the order online button on the site. There you can get merchandise shipped to you, BBQ sauce you can order online for the next day in New York and view our full menu.”

Online orders are becoming a growing means of business for LeRoy and Lewis. Online content still remains a priority for Evan.

“For me, I think online is the push,” says Evan. “We’re trying to build this content library. Every week I’m trying to put our blogs as much as I can and putting our videos on the page.” 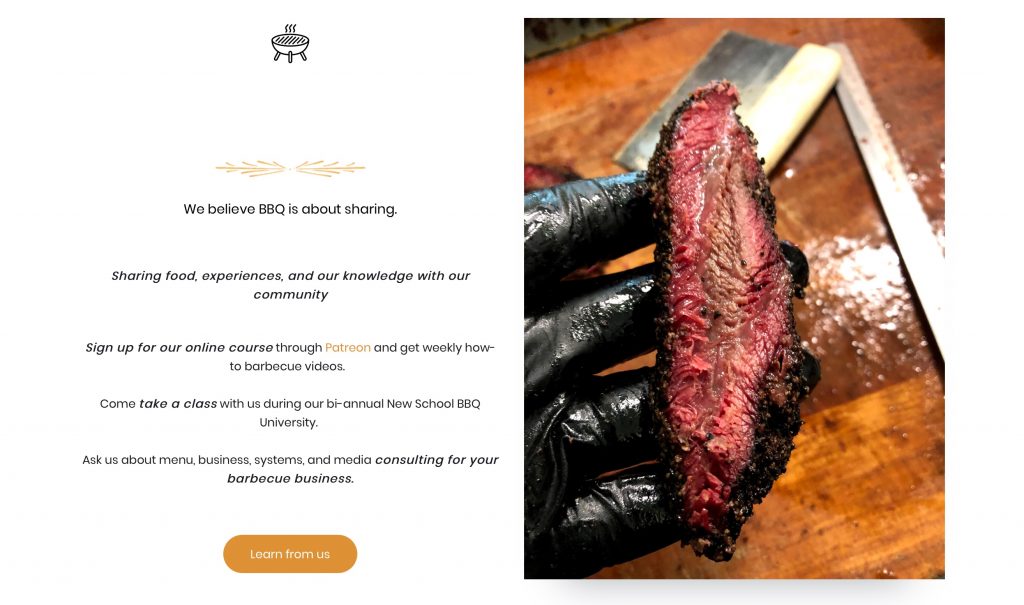 This content even includes The New School BBQ Podcast on Apple Podcasts and SoundCloud.

For the Florida State film student turned Austin BBQ innovator, Evan’s story may read like a movie, but he’d rather tell you himself.

“I feel like I have something to say,” says the pitmaster, podcaster, and online personality.

We’re all ears here, and the BBQ community should be, too. 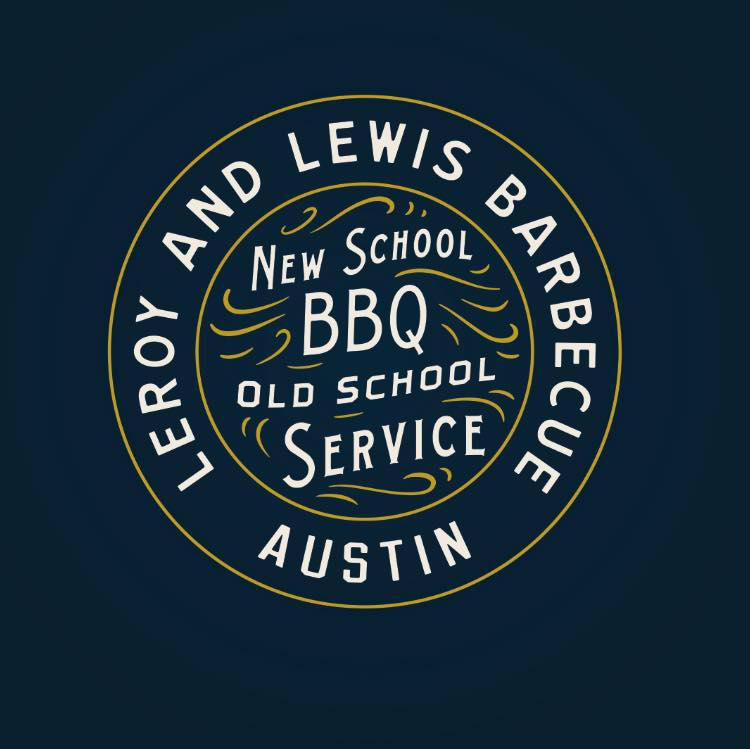 Connect with LeRoy and Lewis online and check out their amazing food and digital content at www.leroyandlewisbbq.com

Subscribe to the New School BBQ Podcast hosted by Evan LeRoy on your Apple or Android device www.soundcloud.com/evan-leroy-443572782

Get in touch with the Digital Hospitality team at Cali BBQ Media by emailing podcast@calibbq.media or by filling out the form below.

Let us know how we can help you on your own digital journey.