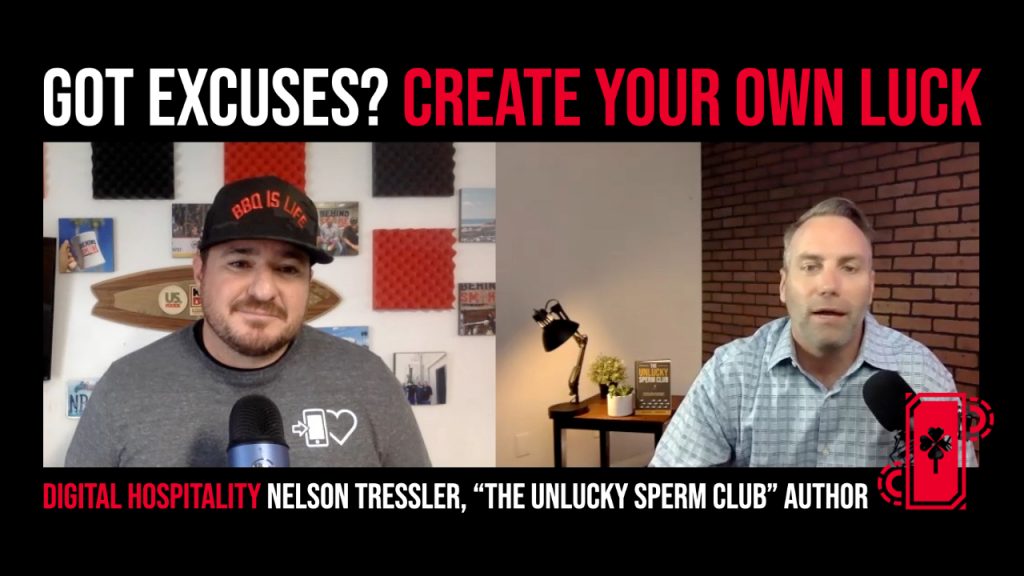 Nelson Tressler wants to teach you how to create your own luck and become the best version of yourself with resourcefulness and rejecting a victim mindset.

Sure, you do. We all do. But how do your excuses stack up to that of entrepreneur and author Nelson Tressler? 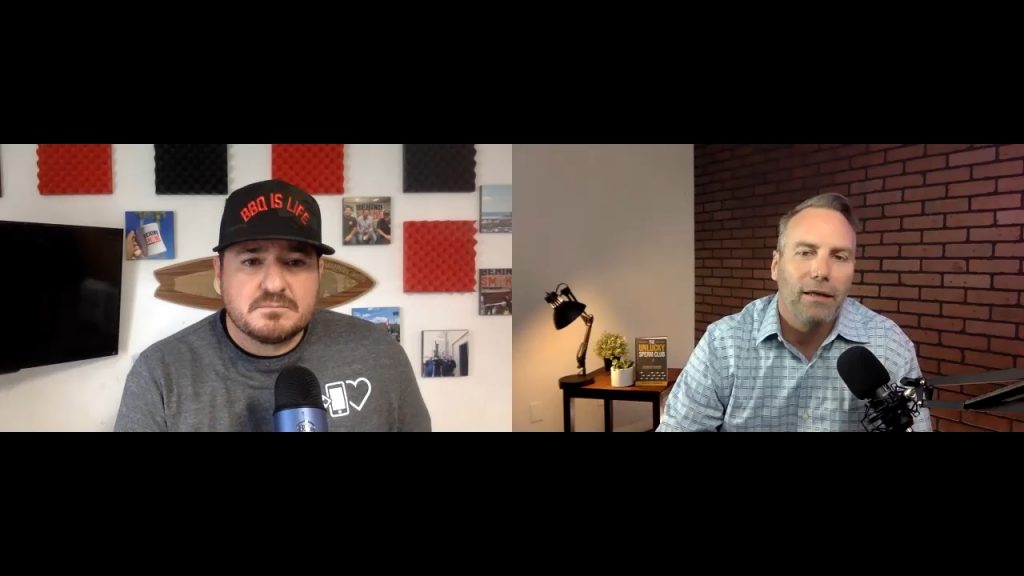 “My mom became pregnant with me when she was 15 years old,” said Nelson Tressler on the Digital Hospitality podcast. “While she was pregnant, her father murdered a police officer.”

“He was facing the death penalty and my mother testified that the reason he murdered the police officer was that the officer had raped her, and she was pregnant with me.”

Let that sink in.

So, are excuses like a poor night of sleep or a bad boss making you not reach your goals seem a little weak right now?

Listen to the full interview with Nelson L. Tressler at Cali BBQ Media or wherever you subscribe to podcasts. 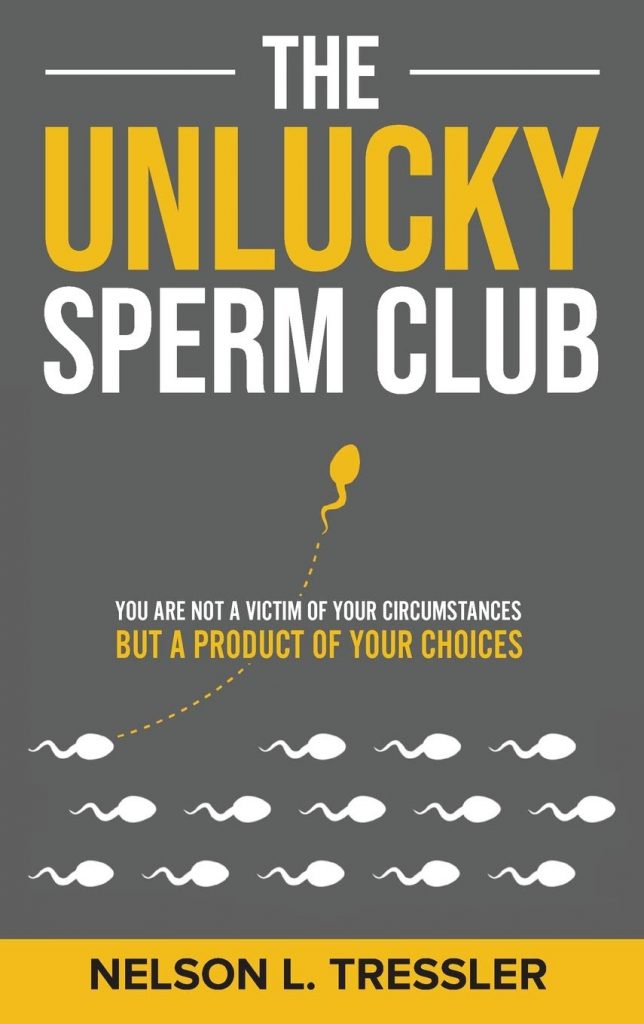 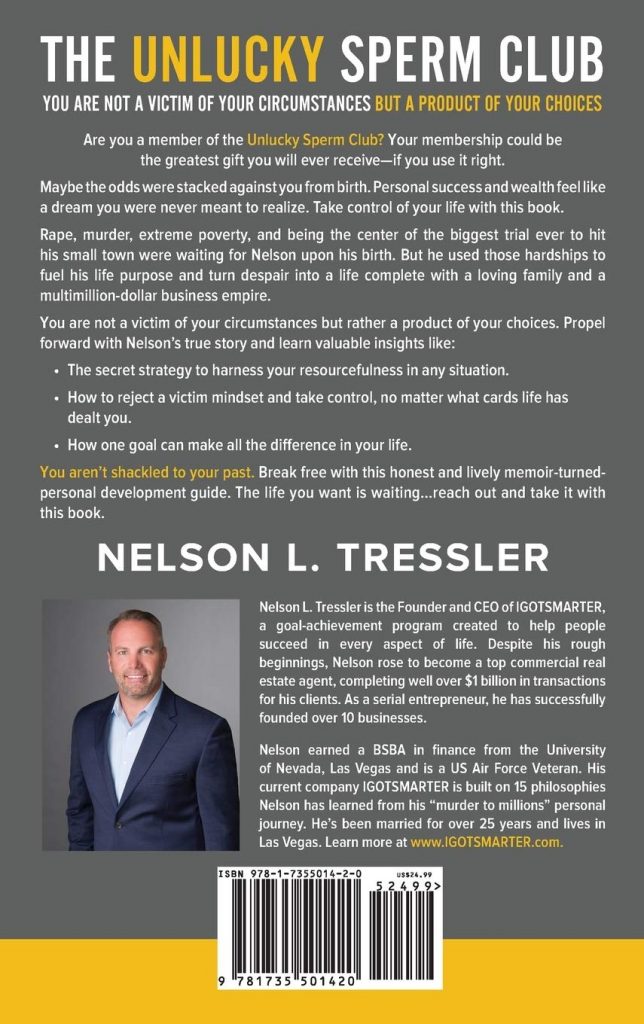 Let’s let Nelson Tressler continue his story of being a member of “The Unlucky Sperm Club,” an inspiring book about a harrowing story that teaches how not to become a victim of your circumstances, but instead, a product of your choices.

“My grandfather was found guilty and served the rest of his life behind bars,” shares Nelson. “Being the child of a 15-year-old mother, my life didn’t become any easier after that.”

You Can Overcome Pain:

For Nelson Tressler, life wasn’t easy and because of that, finding excuses could be plenty easy. As a kid born into extremely difficult circumstances, his life only got harder when he was physically and emotionally abused by his stepfather. Despite only being a child, he had to provide and take care of four younger siblings and failed the fourth grade because of it.

After failing the fourth grade, Nelson was placed in special education only to find out he was dyslexic. While he started getting help at school, life was no easier at home. His stepfather was killed by a drunk driver, which absolutely broke his mother and led her to attempting suicide. Thankfully unsuccessful in her attempt, it still caused the family to split up and led Nelson to live with his grandmother.

As most of us read this, not only are our excuses slipping away, our compassion for Nelson is only increasing. Fortunately, these hard times provided a springboard for a fresh start. Living with his grandmother, he was now privy to food and heat. Even more valuable, he was blessed with belief and encouragement.

“My grandmother told me every day, ‘Nelson, you’re going to make something out of your life,’” Nelson remembers. “She told me that so much that I started to believe it.”

Believe in himself he did. While life would still not be easy, he became the first person in his family to graduate college.

Moving far away from the hometown that both broke and built him, Nelson started a family of his own and became very successful in the professional world. 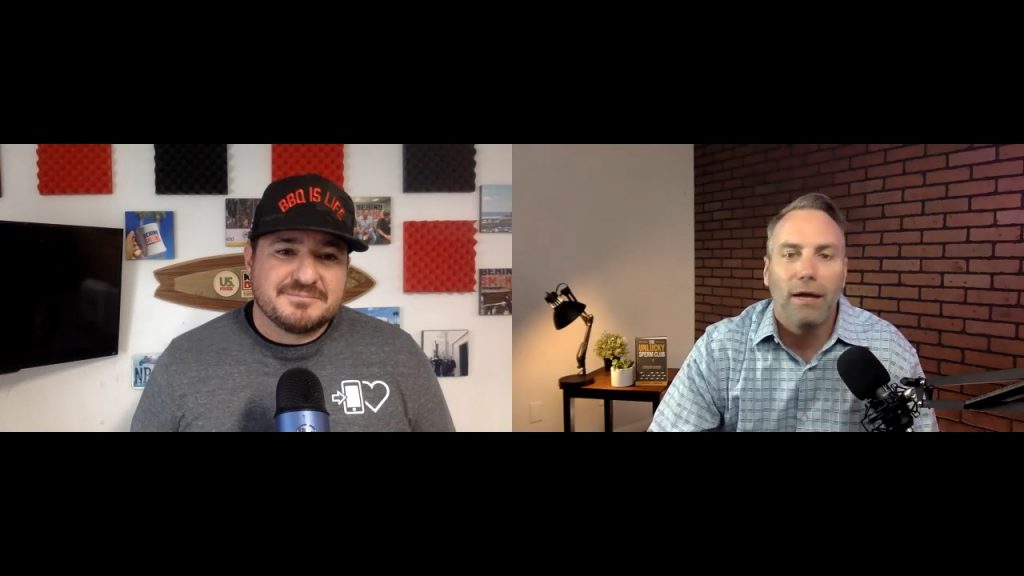 The past may have been behind him, but the pain followed him everywhere he went.

“I buried it,” shares Nelson. “The only person I told was my wife, I didn’t tell my children, my friends or my in-laws. For the longest time those circumstances weakened me.”

This is sad to hear considering how far he had come. Luckily, a change in attitude would change everything.

“Once I realized why I lived that type of life, it was so that I could inspire and help other people,” beams Nelson. “For the first time in life, I chose to give those events positive meaning. The same events, I just started giving them a meaning of hope and inspiration for others and now I love to tell that story.”

“It was embarrassing!” Nelson admits in regard to sharing his story at first. “But I’m happy to have survived it and be able to help others now.”

Soon, this sharing started to become authorship by writing his book, The Unlucky Sperm Club: You are Not a Victim of Your Circumstances but a Product of Your Choices.

When writing, the healing began for both him and soon to be a legion of readers.

“One of my most therapeutic things was writing my book,” says Nelson Tressler about telling his harrowing but redemptive story in a nonfiction book. “I wrote out of inspiration and motivation as opposed to talking about it from a negative point of view.”

Nelson’s newfound authorship helped him, and it helped others.

“That’s what keeps me going every day,” smiles Nelson. “Every day I’m getting some sort of DM or response on social media telling me how my book changed their lives.”

Eventually, Nelson felt it was time to take his life lessons and goal chasing to a new platform: the world of smartphone applications.

By launching the IGOTSMARTER app, Nathan Tressler created a system to help others looking to better themselves and reach their desired heights.

Download IGOTSMARTER from the App Store, Google Play, or online at igotsmarter.com.

“I just wanted to give people a program to help them achieve their life’s biggest goals,” he notes. “I wanted to make it nice and easy for people, so they are crystal clear on their goals. I built it into an app, and it’s been getting incredible responses.”

In creating the app, he’s allowed users to connect with other people looking to better others and hold each other accountable.

“You increase your likelihood of success by 95%,” Nelson says on having a success partner.

This proves true for Nelson even when it came to creating his app.

“I’m not a tech guy, I needed help to turn this computer on to do this podcast,” laughs Nelson. “But I’ve surrounded myself with good people.” 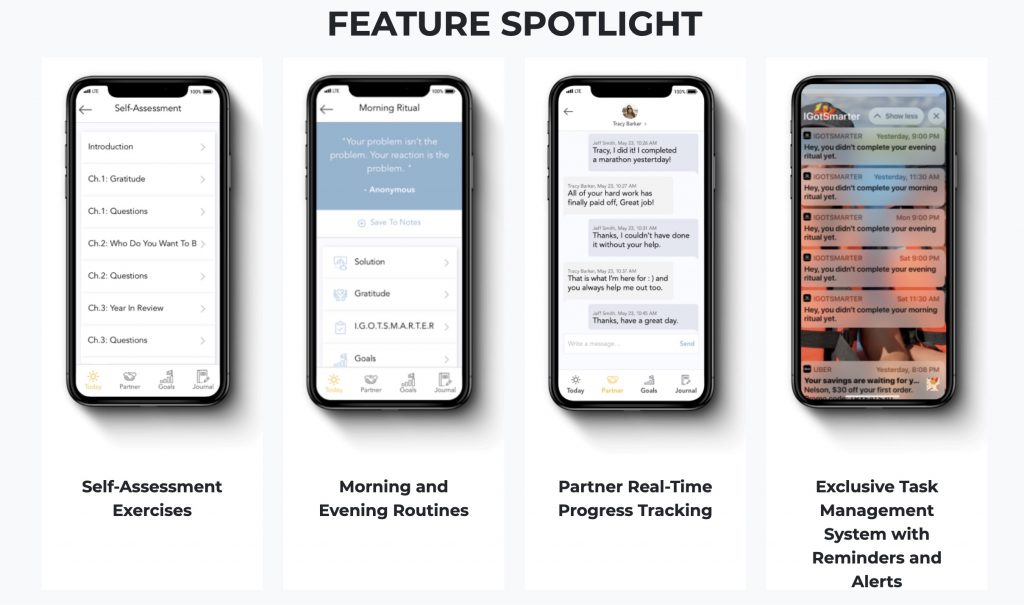 For Nelson, putting himself around good people in real life and on the web has given him a large network of supporters. Just the same, he has his detractors.

Struggling with haters or those that simply don’t get it? Well, Nelson has an analogy for you.

“You know who Coast Guard swimmers save first?” asks Nelson Tressler. “The people who swim towards them. You get haters out there, but I’m not there for them. I’m here for the people swimming towards me.”

These days, plenty of people are swimming towards Nelson and diving deep because of him.

For a person whose story started in tragedy, it’s become a triumph with each new chapter. Just the same, it’s allowing glory for the sequels: his children.

“Goals are a magical thing,” states Nelson. “Once you change that one person, you’re changing everyone’s life that follows them and I’m a perfect example of it.” 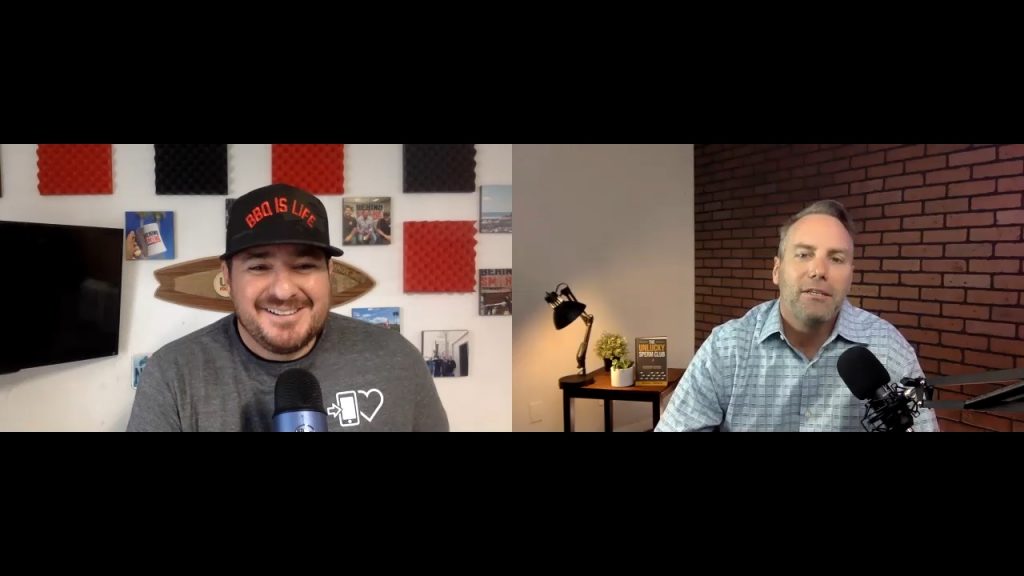 Nelson has changed himself and he’s changing the world around him.

So, still have excuses?

— Article by Cali BBQ Media Content Producer Ian Stonebrook. Get in touch with Ian with questions, compliments, or writing job pitches at ian.stonebrook@gmail.com or on social @ianstonebrook.

Nelson Tressler is an author, entrepreneur, and Founder and CEO of IGOTSMARTER, a goal-based program and software app created to help people succeed in every aspect of life.

Nelson’s success and life philosophy come from his unique beginnings. Rape, murder, extreme poverty, and the biggest trail ever to hit his small town were just a few things waiting for Nelson upon his birth.

The child of a 15-year-old mother, Nelson Tressler’s young life had him starting at the bottom. The oldest of five children and raised in poverty by an abusive stepfather, Nelson turned resourcefulness and tenacity into a life skill. He played college football and joined the US Air Force on the GI Bill, completing tours in Saudi Arabia and Turkey. Upon leaving the Air Force, Nelson fulfilled his first big goal of being the first person in his extended family to receive a college degree.

Despite his unbelievable difficult beginnings, Nelson rose to become a top commercial real estate agent and investor, completing well over $1 billion in transactions. As a serial entrepreneur, he has successfully founded over 10 businesses including one of the largest privately help pet resort chains in the nation. Nelson’s first big goal was when he became the first person in has extended family to earn a college degree, receiving a BSBA in finance from the University of Nevada, Las Vegas. He is a US Air Force Veteran.

His current company IGOTSMARTER utilizes an app and goal program that increases goal achievement by as much as 95%. The program is built on 15 philosophies Nelson has learned from his “murder to millions” personal journey.