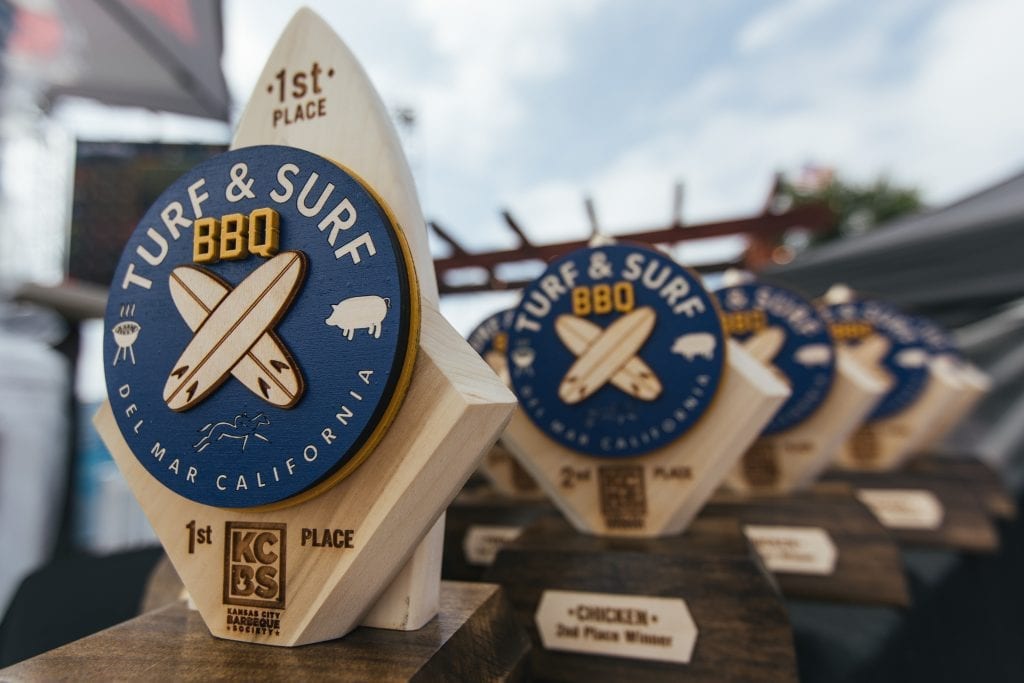 As any pitmaster knows, a “Bet on BBQ” is a sure thing.

When he watched the more than 2,000 people who decided to #BETOnBBQ at the Del Mar Thoroughbred Club on Aug. 19, event co-organizer Shawn Walchef knew he was seeing a movement: a West Coast BBQ Movement.

The line to get into the 2018 Turf & Surf BBQ Championship was big at times, but not as big as the appetites of the attendees, who happily queued up so they could taste all-you-can-eat samples of meat, seafood and side dishes, while celebrating the sport of food and even horse racing. They came hungry, but left satisfied.

The KCBS-sanctioned competition, now heading into its fourth year, was organized by Arlie Bragg, Gene Goycochea, Shawn Walchef and Derek Marso. With $15,000 in prizes, appetizing food that transcended the “traditional” barbecue label, and BBQ industry camaraderie — all set against an ocean backdrop at the majestic Del Mar racetrack near San Diego — the event was one to remember.

It’s not often you get to munch on an endless supply of surf and turf at the same spot “where the turf meets the surf.” While the event promotes itself with the hashtag #BETOnBBQ, everyone knows it’s not much of a gamble when you combine expertly cooked BBQ and the beautiful Pacific Ocean. That’s a winning combo for sure.

The event has paid off big for the organizers as well, who’ve been able to grow their passion project into an esteemed BBQ competition that has got people talking all over the country.

“Once you see the setting, it speaks for itself. It’s breathtaking. You’ve got this gorgeous thoroughbred horse track, literally, where the turf meets the surf,” said Shawn, who owns Cali Comfort BBQ and hosts the “Behind the Smoke: BBQ War Stories” podcast with fellow event organizer Derek (Valley Farm Market). “Not only did the public love it, but the KCBS judges responded as well.”

The event’s continued evolution and growth is a testament to the power of the “West Coast BBQ Movement.”

“I think we’re definitely moving in the right direction,” Shawn said about the movement. “The biggest thing we want to do at the event is celebrate what’s happening in BBQ and the West Coast.”

California’s own 7-8-9 BBQ beat out 50 other teams to take home Grand Champion after finishing 14th in the Chicken and Brisket categories, 4th in pork and 1st in Ribs. Along with that huge honor, the team got to take home one of two special championship surfboard trophies and a Big Green Egg.

The other surfboard trophy went to Reserve Grand Champion’s Ridge Route Boys BBQ, from Bakersfield, California, who got the top score in the Pork category.

People’s Choice went to Encinitas BBQ Co., who also won a Big Green Egg courtesy of the sponsor. Second and third in that category were awarded to Yard Pirates BBQ and Rub Your Meat BBQ, respectively.

The Randy Gille Award, named after the charitable man who died last year, went to Bill Curtiss, awarded for his selflessness and desire to give back and lend his hand.

“He [Bill]  does exactly what Randy was always doing,” Derek Marso said during the award ceremony.

The BBQ action happened alongside the thrilling horse racing taking place at the Del Mar Thoroughbred Club racetrack. Bing Crosby, who helped open the track in the 1930s, famously crooned about the spot in his song, “Where the Turf Meets the Surf.”

The “Surf” portion of the Turf and Surf BBQ Championship was new this year and teams went all out on their offerings. The Your Behind BBQ team from Arizona won the Seafood category with a perfect 180 score for their lobster mac and cheese that was served stuffed in a lobster tail.

Other food being cooked that day ranged from traditional brisket and pulled pork dishes to wilder offerings like an entire smoked alligator courtesy of Juicy Brucey’s Smokin’ Hot Meat.

It wasn’t just smoked meats and savory sides that got attention at Del Mar — there were also amazing desserts to try, like the colorful donuts provided by San Diego’s Finest Donuts and refreshing “shaved snow” from Snoice.

“BBQ events are always focused on what’s the best BBQ, but desert is an incredible way to improve your BBQ festival or competition. Kids love it, families love it,” Shawn said.

A day of BBQ and cooking

Apart from the competitive portion of the event, there were live cooking demos by food stars Sam The Cooking Guy, Ray “Dr. BBQ” Lampe and Gene Goycochea.

Santa Monica Seafood donated around 300 pounds of fish and US Foods provided a portion of the few thousand pounds of meat cooked up at the event. Other sponsors also chipped in to reward the winners, including Yeti who gave coolers to the champs.

NFL Media reporter Jim Trotter was one of many who took to social media to celebrate the success of the Turf & Surf competition. While he didn’t win any money at his first live horse race, Jim Tweeted about how much he enjoyed the cookoff experience, calling it “an amazing event for the people of San Diego.”

Derek Dawson, a manager with the San Diego Gulls hockey team, competed at Del Mar for the first time in a cooking event. Though a novice competitor, he was able to please the local celebrity judges enough to pick up 6th place in the Tri-Tip category.

“Friends and Family. This is why I BBQ,” Derek Dawson wrote on Instagram, using the hashtag #SoCalBBQMovement.

The sport of cooking is getting more respect year after year, Shawn said, and it’s his mission to continue helping promote it to those outside the competition cooking community. That’s why he invited celebrity judges from the media industry to take part at Del Mar and learn all about KCBS judging — in order to spread the word and the movement.

His and others efforts to promote KCBS seem to be working. There’s been an 18-percent increase in contest participation by members in the past year, according to the KCBS website.

By all accounts, food sports are here to stay. And so is the Turf & Surf BBQ Championship.

CLICK HERE to listen to the Our Rendezvous Podcast episode recap of BETonBBQ18 with guest: Derek Dawson of the SD Gulls BBQ Team.