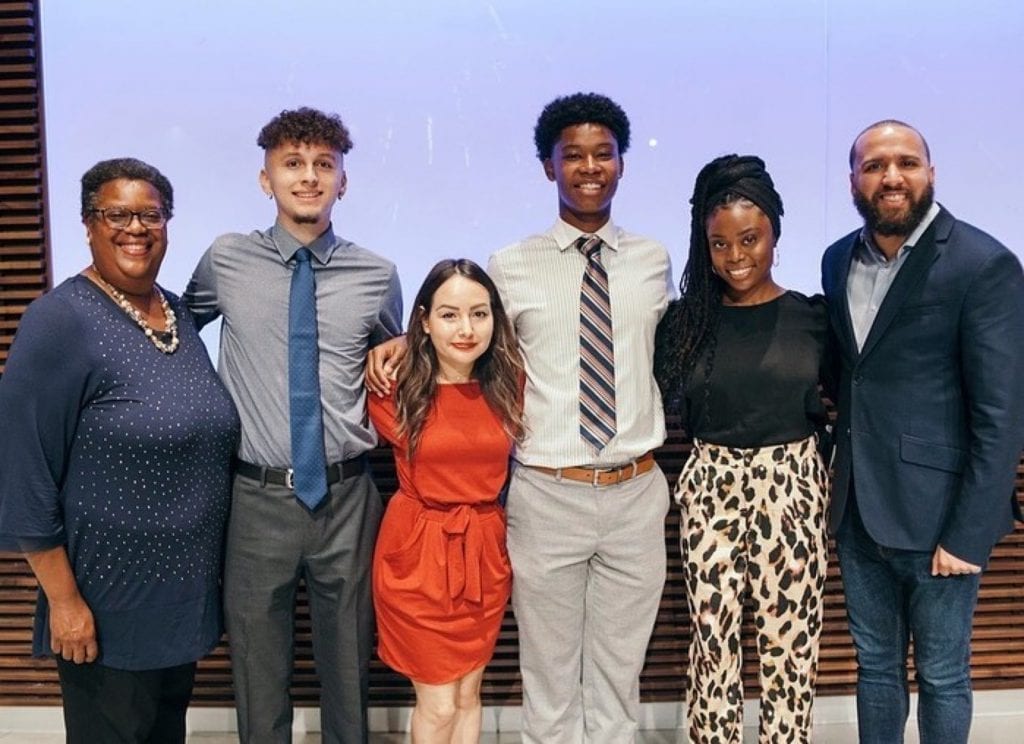 The future of journalism was celebrated at a San Diego Association of Black Journalists scholarship dinner.

A talented and inspiring group of young men and women were applauded during the annual celebration of journalism, which was catered by Cali Comfort BBQ. The night’s keynote speech was by Washington Post journalist Wesley Lowery, who covers national politics, race, justice and law enforcement.

“I always leave these events more inspired than when I came in,” Welsey Lowery said about the 2019 San Diego Association of Black Journalists scholarship reception.

“NABJ has been huge in my career and my life,” Wesley Lowery said in an SDABJ video. He was an undergraduate member of a chapter when he was a new journalist too.

SDABJ scholarship recipients for 2019 were:

Following his speech at the scholarship reception, Wesley Lowery spoke about the importance of the ABJ to attendees who were recording video and taking notes as he spoke.

Even at a celebration dinner, you can’t stop journalists from reporting. It’s what they do, document the world to help everyone else understand it better. Celebrating that spirit is what the SDABJ banquet dinner was all about.

“I had a chance to talk to these four amazing scholarship recipients. Some of them coming out of high school, others who are already in college. I couldn’t turn that down,” Wesley Lowery said on an Instagram video posted by the SDABJ. “One of the most important things we do as professionals journalists — and as black professional journalists — is encourage the next generation of journalists to come up behind us.”

Since the San Diego chapter of the ABJ created its scholarship program, it has helped dozens of aspiring journalists with diverse backgrounds and interest. The honorees are celebrated in person at an annual scholarship reception, which was hosted by NBC 7 San Diego News Anchor Omari Fleming. All proceeds from the event go to the SDABJ Scholarship Fund.

At the reception, SDABJ President Donna Stewart was presented with the Jerry McCormick Member of the Year award for all she does for the 501(c)3 nonprofit organization.

This year’s SDABJ reception was catered by Cali Comfort BBQ, who provided their slow-smoked specialties as a way to show their support for the organization and its mission. Other sponsors of scholarship reception included: The San Diego Union-Tribune, Qualcomm, iHeart Media, NBC 7 and Telemundo 20.

The San Diego Association of Black Journalists were so happy with the Cali Comfort BBQ catering that the group decided to hold their next monthly meeting at the Spring Valley barbecue restaurant.

Cali Comfort BBQ catered the SDABJ reception with their slow-smoked barbecue and sides.

“Our friends at @calicomfortbbq supported our SDABJ Scholarship Reception, so we supported them by holding our monthly meeting there today,” wrote San Diego broadcaster Shelley Wade on her Instagram page with a photo of her plate of BBQ sides and tri-tip, a Cali Comfort BBQ specialty.

“We were honored to help at such a great event,” said Cali Comfort BBQ owner Shawn P. Walchef. Cali Comfort BBQ makes it a point to always give back when it can, just like those who help with the San Diego Association of Black Journalists.

One of those supporters is Jim Trotter, an NFL Network reporter who is continually impressed at the hard work and aspirational attitudes of the young journalists who are awarded scholarships by the San Diego Association of Black Journalists.

Jim Trotter said it’s a much different time now than when he was starting in journalism, like back when he was a sportswriter for The San Diego Union-Tribune. That was well before he became a correspondent at prestigious publishers such as Sports Illustrated, ESPN. At one time he was just starting out like every other young cub reporter.

“It’s a completely different landscape from when I first got in,” Jim Trotter said. “(But) somethings still translate. That’s hard work. That’s commitment. And at the end of the day, this business is about relationships. If you focus on those things, the hard work, the dedication, the relationships, you’re still going to make mistakes, but at least you know you’re doing it the right way.”

Newspaper reporters used to be writers, like Jim Trotter was at the Union-Tribune, but now reporters are expected to wield myriad tools, not just a pen, but cameras, software, and more. Whatever it takes to get the job done. Versatility is crucial, Jim Trotter said.

Jim Trotter has advice for the next generations of journalists: never say no.

“Take advantage of every opportunity. Take your time, just get your foot in the door someplace and learn,” Jim Trotter said about advice for new reporters. “You’ve got to be willing to take advantage of all those opportunities that come along and never say no.”