How This Former D1 Athlete Beat Depression and Changed Lives 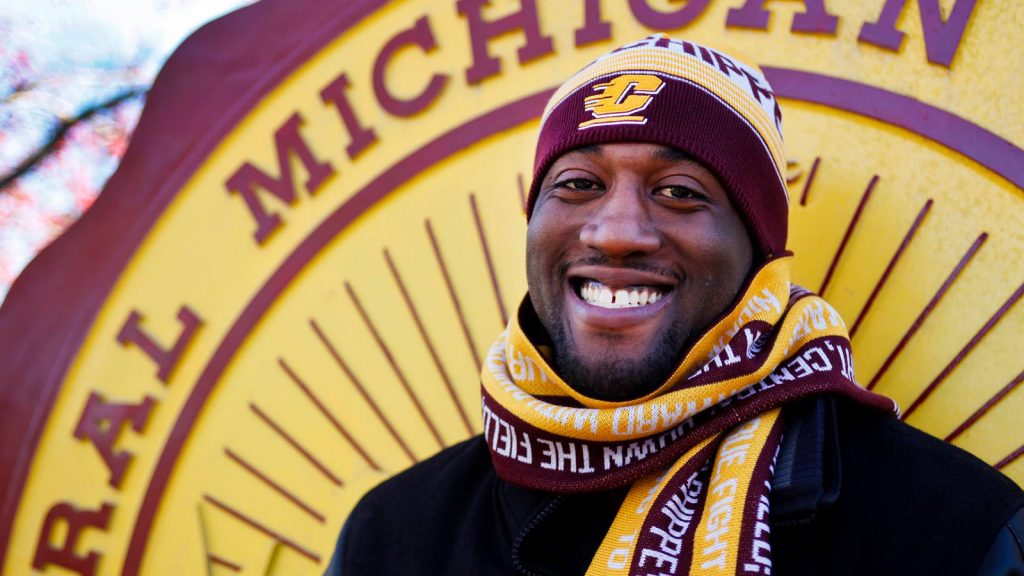 Darryl Stinson is a guest on the Digital Hospitality podcast, where the inspirational leader talked with host Shawn Walchef about pulling himself up out of darkness to find a light to guide him, while learning the power of positivity and self-care. 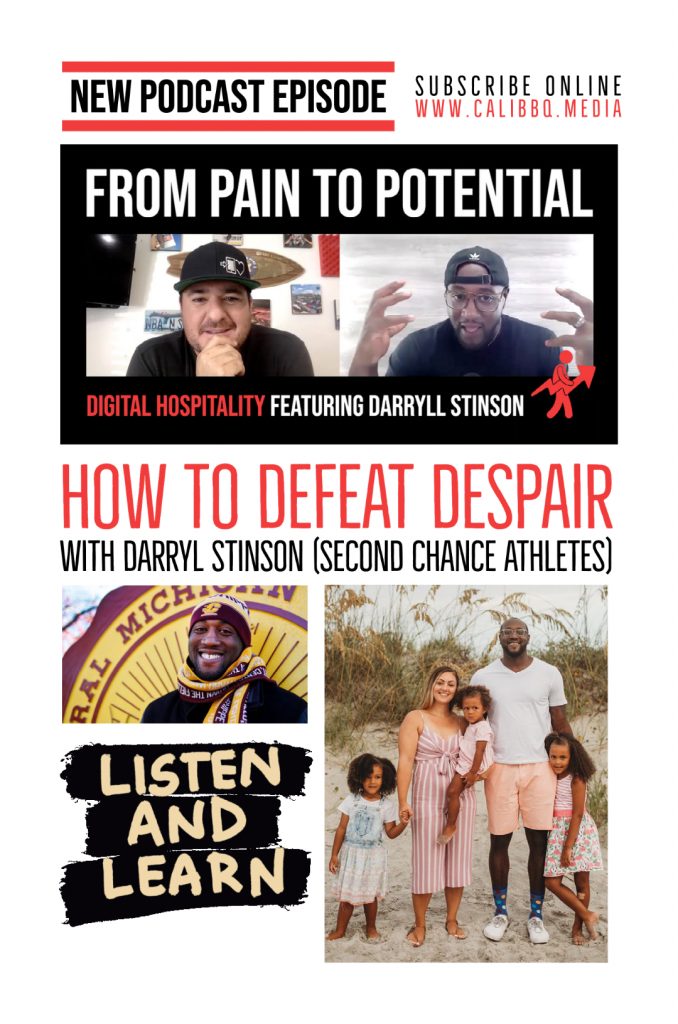 A two-sport star out of Jackson High School, Darryll Stinson had college coaches attending his amateur athletic events in hopes that he would someday compete for their university. As a youngster in Jackson, Darryll came from humble beginnings but showed limitless potential in both sports and academics.

“My mom put me in accelerated learning classes,” Darryll Stinson recalls of his youth in his conversation with Shawn Walchef on Digital Hospitality. “I was one of two black students in an all-white class. At that time, there was actually nothing wrong with that. They liked me, they laughed at my jokes, they cheated on my test.”

Popularity was a perk for Darryll at a young age as his quick wit and large stature made him a favorite amongst his grade school peers.

As he got older, the goal posts for popularity were suddenly pushed back. Having friends both black and white was one of many traits that made Darryll unique. To the societal expectations of his black peers, it made him an outcast.

Suddenly, a harder persona was formed that was looking for acceptance but building up doubt. Fortunately, there was still one place he could always find approval.

“Sports gave me the freedom to not have to choose between white and blacks,” Darryll looks back. “They didn’t care if I went to the bonfire or the basement party as long as I was scoring points and we were winning games.”

While Darryll’s duality as a student with a diverse friend group was under attack in high school, his identity as an athlete was in full force. Choosing to play football in college, his desire to impress others would soon prove the beginning and end of his athletic career. 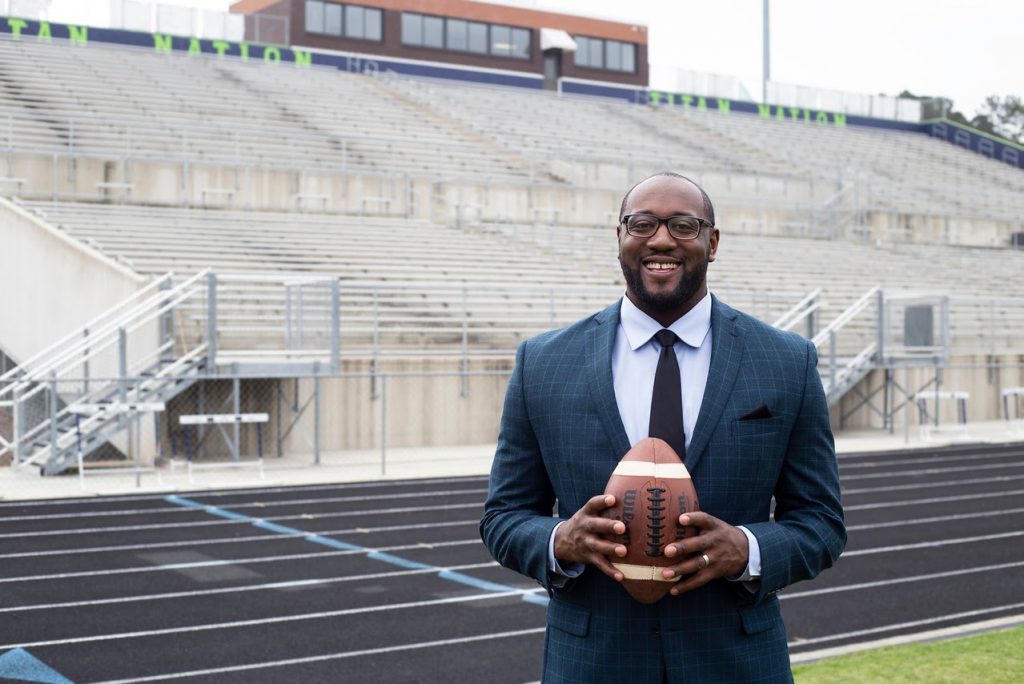 One fateful day in the weight room as a freshman in college, Darryll would try to show up his peers only to have his career quickly ended.

“I ruptured a disk in my back,” Darryll Stinson recalls on the Digital Hospitality podcast. “All because I was trying to impress and earn love.”

After the off field injury, Darryll’s life began to spiral. Without a future in sports and without an identity, his mental health and self-worth were gone.

Darryll slipped into a deep depression and even attempted suicide.

“I used to say that I never had the guts to pull the trigger,” Darryll Stinson said. “I would swallow pills, I would down alcohol, drink and drive, but I would never pull the trigger.”

Dark times lead to dark places, all rooted in the wanting to be loved and accepted and never thinking he was good enough.

“He saw me when I was still selling drugs,” recalls Darryll. “He looked at me and said, ‘I see a leader in you.’ It was the first time my thoughts were being challenged to go higher.”

Having always been told he wasn’t good enough as a form of encouragement in sports or the classroom, Darryll was encouraged by the positive motivation he received from Pastor Hall. He began to seek help for his depression.

“I think everybody needs a counselor,” says Darryll Stinson.

This was true for Darryll and likely true for all of us. After seeing about eight therapists, he finally found one that he connected with.

A major proponent of positive self-talk, his new counselor identified a pattern that was problematic for Darryll and likely many of us.

“She goes, ‘Wake up,’” Darryll remembers. “She says, ‘We’ve been talking for forty-five minutes and all you’ve said is negative. You’re already brainwashing yourself with negativity. You might as well change the tape.’” 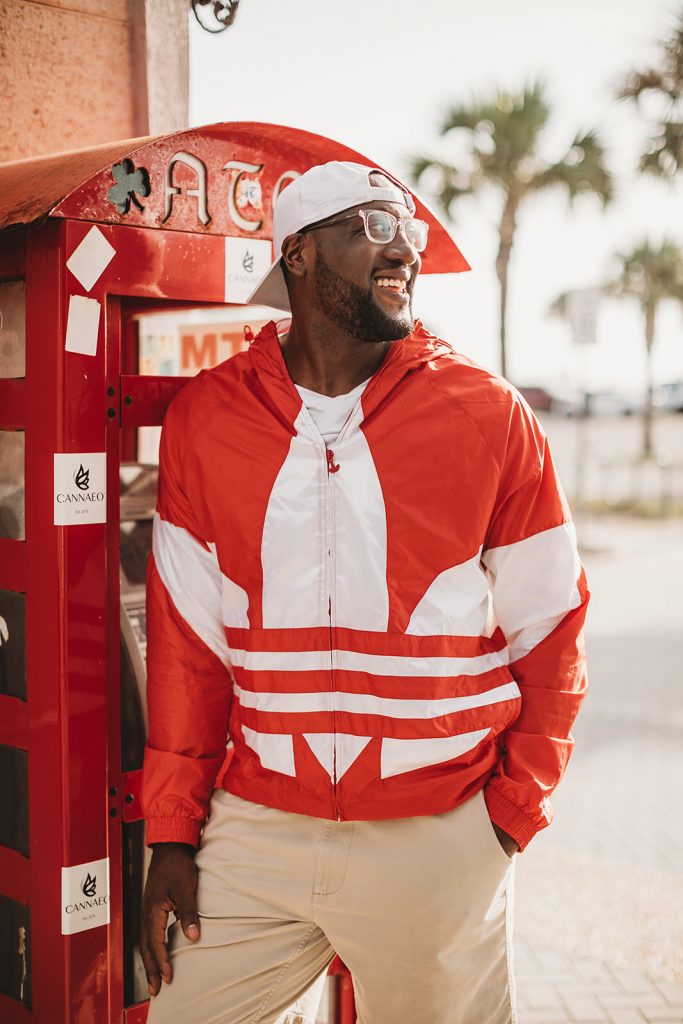 Since implementing this strategy, Darryll has unlocked his potential and even become a motivational speaker on topics such as suicide and depression.

“I was presenting it as if I wasn’t strong enough to pull the trigger when in reality the reverse was true,” explains Darryll of his bouts with suicide and depression. “It actually takes more strength to keep going. I want people to see those who are struggling with depression and anxiety the same way we view the scene in Rocky where he just keeps getting back up after he gets hit. People who are fighting depression, anxiety and mental illness are some of the strongest people in the world because they keep getting punched, they keep fighting thoughts that they’re not good enough, yet they keep getting back up.”

Fighting depression or anxiety yourself? You’re not alone and you’re not weak for fighting that fight.

The way Darryll sees it, to take on the fight is strength in itself.

“There’s a lot of people that won’t admit that they’re struggling because they think it’s weakness,” notes Darryll.

“I’m trying to reframe it as it’s actually a strength. It takes more strength to speak up about it than it does to be quiet about it. Depression grows in darkness, but it multiplies in silence. Depression tells you that you’re the only one going through your unique situation and that no one else can relate because your personality is so different, your situation is so different. In reality, people might not have the exact same situation as yours, but people can relate to feeling like they want to quit. Yes, it’s a half truth. You do have a unique situation, but there is somebody that can relate.” 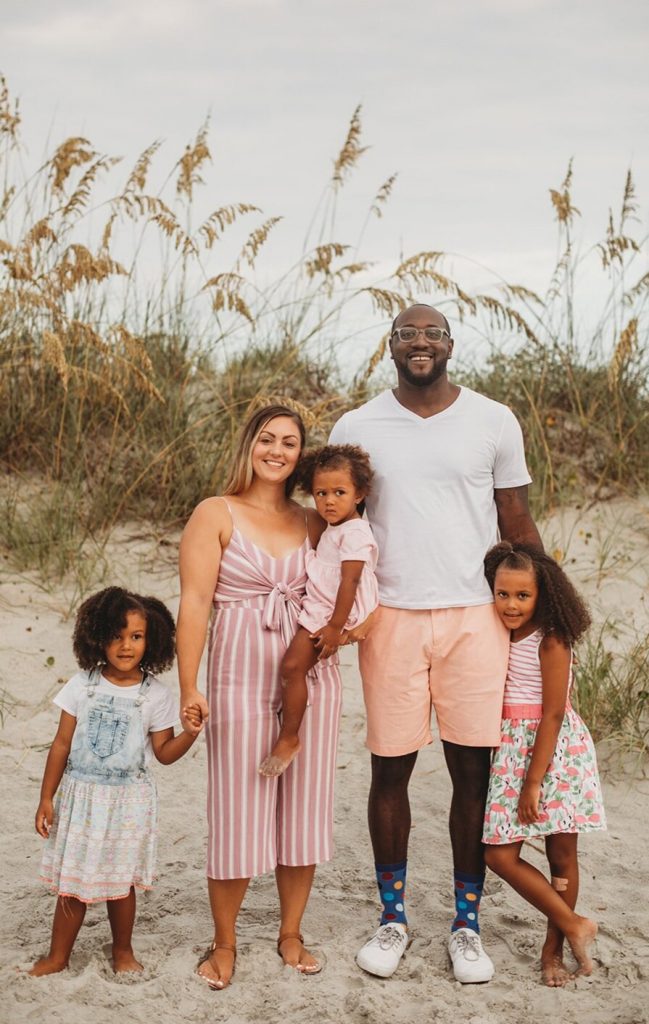 As Darryll explains, the root of depression is often half-truths. We can all get caught up in a negative narrative of ourselves because there seems to be some evidence that backs it.

In reality, it’s often only half true because of our negative perspective or even not true at all.

“Typically, when people have mindset issues, it’s because they believe a half-truth or just a full out lie,” Darryll states. “But most of the time it’s half-truth. Distinguishing between what’s true and what’s half true? That’s the trick.”

For years, Darryll believed lies rooted in half-truths that he would never have a happy future and that he was not worthy of love. 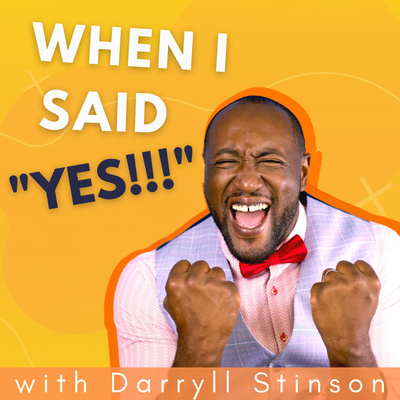 Practicing positive self-talk, going to therapy and unlocking others has inspired Darryll to start the When I Said YES!!! Podcast and Second Chance Athletes organization.

His story as a former D1 athlete and suicide survivor is one of rebirth and inspiration. It’s also a vital tale about the importance of positive self-worth and practicing self-care.

What would our lives look like if we loved ourselves the way we loved others? Probably pretty awesome! Darryll is doing just that and spreading his insight and positivity through his podcast and on social media.

Like many, taking the dive into digital media or other new ventures can be daunting. As Darryll knows firsthand, it all comes back to mindset.

“We need to develop an abundance mindset,” says Darryll Stinson. “A scarcity mindset will only look at what you can see right in front of you and says, Nobody out there cares about this. 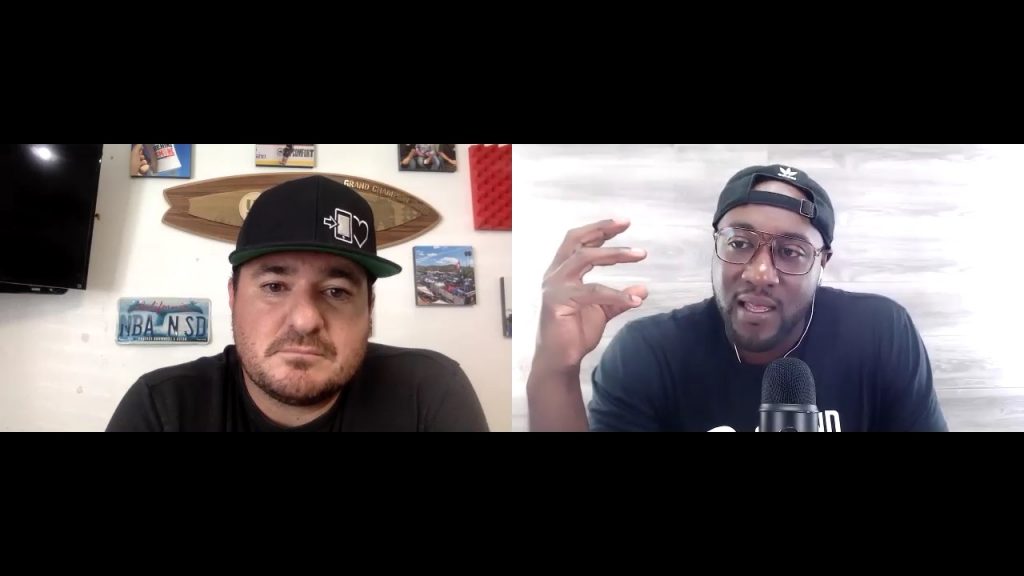 “An abundance mindset says, Somebody out there cares about this and that’s what caused us to share. I think if people knew that they would succeed I think they would do it. I think it’s the fear that it might not work.”

While social media can be a place for negativity, comparison or other thought patterns associated with depression, Darryll sees it as a way to spread positivity, good news and build relationships.

For Darryll, this is more true now than ever.

Despite the dire times our country is in, Darryll remains optimistic. After all, having a diverse group of friends is truly what Darryll has always been about. In 2020, Darryll still feels the need to converse and connect even if social media can sometimes play to polarizing opinions.

“I still believe people are good,” shares Darryll. “It’s just that we sit behind screens and we judge people based upon a condensed version of what we see. We see a scene and we think it’s the whole movie. We have got to get into people’s whole movies, period.”

Since his rise to fame as a high school superstar, Darryll’s movie has had its share of emotional scenes and plot twists.

These days, Darryll isn’t competing with Draymond Green for D1 scholarships or looking for acceptance from his peers. 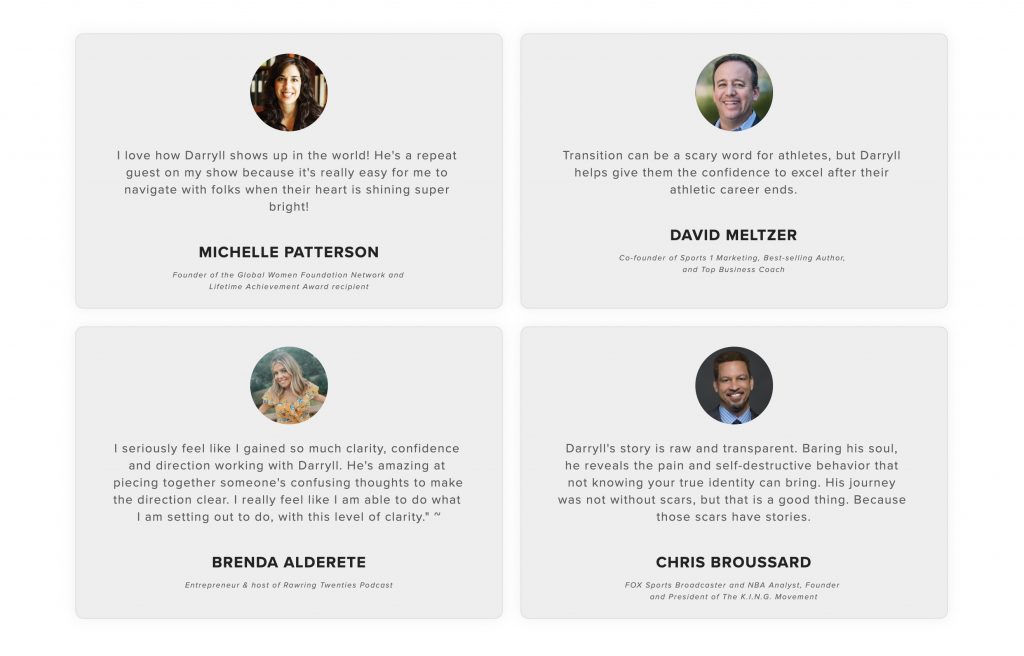 In 2020 as a motivational speaker and entrepreneur, Darryll is empowering a new generation that’s broken down the barriers and stigmas that once held him back.

“Diversity is not a strategy,” Darryl Stinson points out. “It’s a lifestyle.”

Yes, the tall kid from Jackson, Michigan who stood out in his advanced classes is now standing up for the kids just like him.

The D1 athlete turned suicide survivor is a certified winner, living a better life than he could have ever imagined.

After all these years and challenges, Darryll Stinson has given up on half-truths for self-love and inspiration. 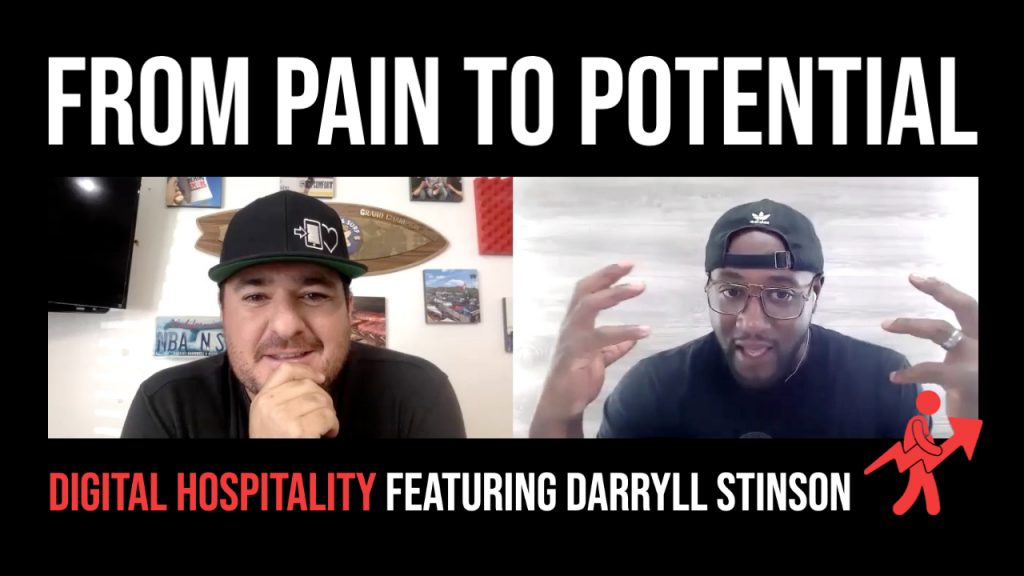 Learn more about Darryll Stinson and how you can also improve your own life at https://www.darryllstinson.com/

Sign up to get a free Starter Guide to Life After Sports at https://www.secondchanceathletes.com/

Listen to Darryll Stinson on the Digital Hospitality podcast at https://calibbq.media/from-pain-to-potential-darryll-stinson-second-chance-athletes-dh053/