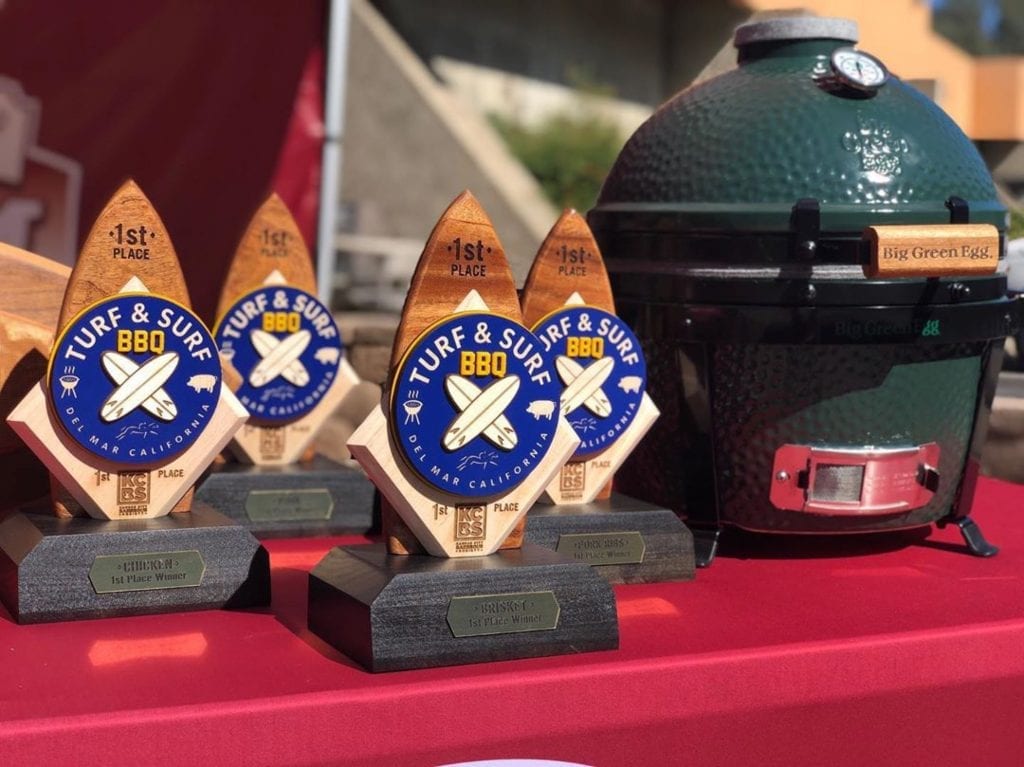 Get tickets now for the Turf and Surf BBQ tasting event on Aug. 18 at Del Mar Racing near San Diego


With the excitement of the annual Turf and Surf BBQ Championship weekend building, event organizers made sure to pay a visit to their friends in the media to talk all about the unlimited food and fun in store on Aug. 18 in Del Mar, California.

GET YOUR TICKETS HERE

As always when they make TV appearances, the Cali Comfort BBQ and Valley Farm Markets crews made their appearance fun and informative, with smoking hot grills blazing. They showed off some of the slow-smoked specialties in store for those who get tickets to the 4th annual #BETonBBQ tasting event and exciting Turf and Surf BBQ State Championship, sanctioned by the Kansas City Barbeque Society.

“There was a bit of a fight in the newsroom because everyone wanted to do this segment,” joked FOX 5 anchor Kristina Audencial. “But I got it.”

In her bio on Fox 5’s website, Kristina calls herself a true foodie. So it’s perfect she won the battle to host the Turf and Surf BBQ segment on FOX TV to promote the Aug. 18 unlimited BBQ and Seafood tasting event in Del Mar, California.

There will be 45 KCBS teams competing in the sanctioned cooking competition and tasting event on Aug. 18, 2019. Top chefs and pitmasters will be cooking up their meat, seafood and dessert specialties during the festivities.

“You can go and take the family, you can watch the races, and you can eat all day,” said Kristina Audencial of FOX 5.

“We sell it out, there’s going to be about 3,000 people… it’s dessert, seafood, and BBQ. There’s something for everybody,” said Derek Marso, owner of Valley Farm Markets.

“Kansas City Barbeque Society is kind of like the NFL for sanctioning professional barbecue, said Shawn P. Walchef (Owner of Cali Comfort BBQ) during the interview.

Ticket holders get to judge the People’s Choice category, which was won at 2018 #BETonBBQ by Dan Sobek and his Encinitas BBQ team, which raises money for the www.carlscause.org charity.

In total, there is more than $15,000 in prizes to be won at the Turf and Surf BBQ Championship in Del Mar.

“If you love BBQ, you can learn about BBQ, eat it and enjoy it,” Shawn Walchef said about the annual #BETonBBQ cooking competition and all-you-can-eat tasting event.

The #BETonBBQ Turf and Surf BBQ Championship takes place every year in August in Del Mar. The 2019 tasting event will be held Aug. 18, 2019, from noon to 5 p.m. VIPs get in at noon and general admission begins at 1 p.m.

Live on CBS News 8: "BBQ Tastes Amazing Even at 7 in the Morning"

“This Sunday at Del Mar Racing, it’s going to be our Bet on BBQ Championship. This is the fourth year we’ve done it. We want to celebrate all the best BBQ on the West Coast,” said Shawn Walchef.

And it’s an all-you-can-eat event. During the morning news spot, Dan Sobek’s amazing ribs were displayed and consumer, to great happiness from the news station.

Heather Myers will be one of the celebrity VIP judges at the event.

“Should I practice (judging),” said News 8 segment host Heather Myers as she dove into the delicious pork ribs that Dan Sobek was responsible for that morning.