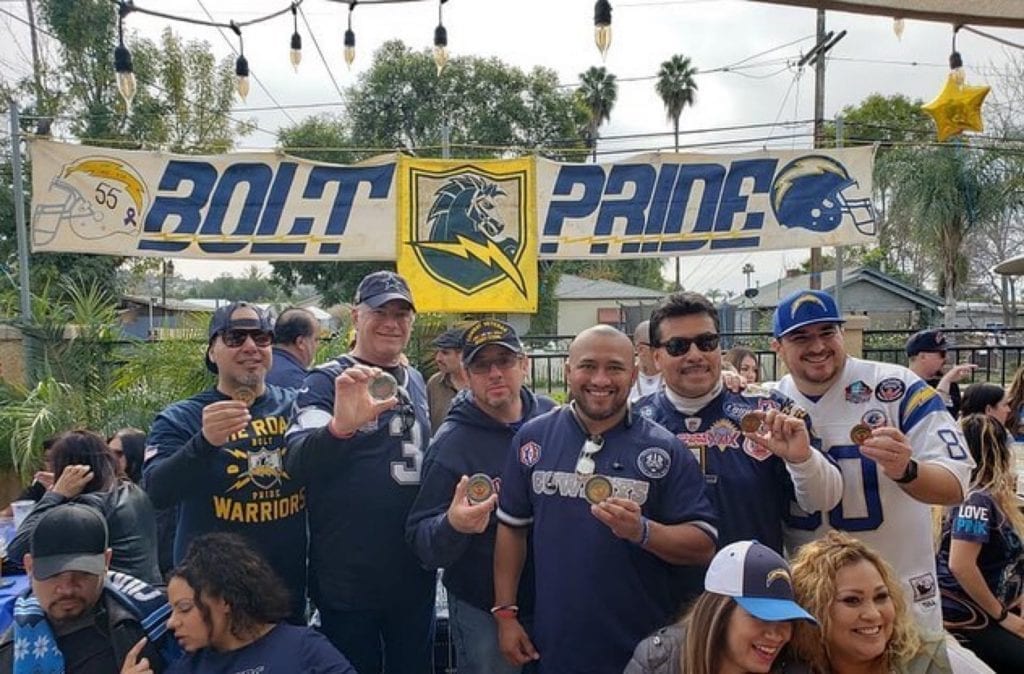 At the heart of the story are businesses with unrivaled enthusiasm for their communities. And business owners who know that it’s not about what team you support. It’s about having support. No matter what colors you wear on game day, everyone should support the rights of a small business to waive their flag with pride. #BOLTPRIDE

Shawn Walchef believes in the Chargers – without apology but with respect for those who abstain. His Bolt Pride is as strong as his love for his hometown of San Diego. He’s even got season tickets to their new controversial stadium in Carson, California. His Chargers fandom, charity work and sportsmanship even got him membership into Pro Football’s Ultimate Fan Association in 2017. Shawn is what you call a lifer.

For a decade, his Cali Comfort BBQ sports bar and restaurant has been a gameday hub for Chargers fans and non-fans alike in Spring Valley, California. During one of their many regular packed-house days, the energy in the room is electric. Clearly, Shawn is not alone in his continued devotion to the blue and gold.

“For the last ten years we hosted every type of watch party imaginable as a sports bar: UFC Fight Nights, pay-per-view championship boxing, WWE events, World Cup matches, E-sports, and obviously Chargers watch parties,” Shawn said. “This has been the most memorable season of my life. Even when the Los Angeles Chargers lost to the New England Patriots during the 2019 AFC Divisional Game, it is always a great time.

“Earlier this year, watching the Chargers win on Sunday night against the Steelers in dramatic fashion, and their heroic effort in Kansas City, was like nothing I ever experienced at Cali Comfort BBQ in 10 years,” Shawn added. “Grown men and women were hugging, laughing, screaming and chest-bumping each other in pure ecstasy. It was a title fight night atmosphere wrapped up in an emotional roller coaster of joyful justification for staying true to our controversial Chargers.”

One of those non-fans crossed a line recently when the anonymous person tried to encourage others on Twitter to leave inflammatory reviews of the restaurant on Yelp. All because of the restaurant’s enthusiasm for their team. Reviews can make or break a small business, so Cali Comfort BBQ stood up for itself online with a Tweet of their own and took control of the story.

“How much shame should we feel for cheering on the team we have always loved? Asking for a friend.”

The winking Tweet, and others inspired by it, took off, inspiring lots of dialogue. At the center of the passionate discussion was the family restaurant from unincorporated San Diego county.

Friends, customers and even strangers were quick to step up in support of Cali Comfort BBQ. As Shawn was quoted in The New York Times about the negativity, one of many discussions of the topic in the local and national media, “It’s OK to disagree, but not to be disagreeable.”

Media Stands In Support of Business

One of the first media organizations to pick up the story was the Ben & Woods morning show on Mighty 1090 AM in San Diego. Steve Woods said it was a no-brainer to support Shawn and Cali Comfort BBQ.

“Ben (Higgins) and I were just compelled to say something,” Steve Woods said. “I would do it for any small business if I saw somebody rallying troops together to leave fake bad reviews. (Shawn) is a great guy and did everything he could to keep the Chargers here.”

As a Yankees fan who’s not from New York, Steve Woods knows that fandom transcends borders. So to hear of someone attempting to smear a small business over football was disheartening.

“It got out of control this year and hopefully, as time heals all wounds, it’s just going to be another blip on the radar,” Steve Woods said. “At the end of the day none of this stuff really matters. Life’s too short. Shawn’s good people and he does a lot for the community.”

NBC 7 San Diego reporter Joe Little was listening to the impassioned plea for respect on the Ben & Woods broadcast during his morning commute and agreed wholeheartedly that slandering a locally owned mom-and-pop business is beyond the pale. When he got to the news station, he heard a similar sentiment from another reporter. So he did what any journalist would do, he told the story through his lens.

“This is a guy who’s trying to make an honest living,” Joe Little said. “It is heart-wrenching. I’m lost on football Sunday’s but still I’m not going to go and blatantly try to destroy and slander someone’s livelihood because they’re a Chargers fan.”

From there the story continued to resonate, on the Web, through the air and on the page.

“Once it hit the airwaves it started taking off, the conversation and on social media, it was a perfect story,” Joe Little said.

It was hard to watch the TV, pick up your cell phone or turn on the radio without hearing a plea for civility and support for community-building businesses like Cali Comfort BBQ.

Tabitha Lipkin spoke up for the Chargers bar on Fox 5 Sports. Tailgate Radio interviewed Shawn. The Athletic wrote a detailed feature unpacking the public discussion. Shawn showed off some of the restaurant’s most popular food items on KUSI’s Good Morning San Diego. And, of course, there was the big New York Times feature online and in the widely distributed Sunday print edition. That particular article even made it on the Times’ wire service, being sent to publications across the country.

The Chargers took note of the media coverage and sent a huge box of SWAG, a limited-edition football and official team merch to give to fans on gameday, some who started lining up before the doors opened at 7 a.m.

A letter that was included in the package was from President of Football Operations John Spanos. In the thank you letter, John Spanos said he’s hearing that Cali Comfort is a great place to watch Chargers games. At the bottom, a handwritten note read: “Thanks for your continued support Shawn!”

Shawn has always been a supporter of the local media and often turns the microphones on them during the Behind the Smoke podcast so they can share their own expertise. When they saw him being treated unfairly they knew it was a story worth sharing. Because it’s about more than Cali Comfort BBQ or the Chargers – it’s about a family business pushing past the negative and embracing the positive.

“Above The Butcher Shop” Recording Studio For Behind The Smoke Media.

As you’ll often hear Shawn and Derek Marso talk about on Behind the Smoke, building solid relationships is vital to good business. No business is an island. Treating the media with respect and admiration returns the same feelings of mutual support.

Shawn often gets asked for his advice on how to get press coverage. The answer is you can’t ask for it, you just have to be ready for it.

“We are thinking and acting like a media company. We want to control our own brand and business in the digital age,” Shawn said. “If we weren’t on Twitter this wouldn’t have happened.”

Years of work have been put into telling his story his way and it’s paid off. Not just with media coverage, but with the well-wishes of the community and beyond. Lots of people have the back of Cali Comfort BBQ because they have the back of lots of people. Online and off.

“Because we’re proactive and giving back and trying to help people, we didn’t even ask people to help us. It just happened because,” Shawn said. “When the Dave and Jeff Podcast talked about it, or Ben & Woods, or the local news, they all banded around Cali Comfort.”

As a business owner what do you do when controversy hits you?

“You do what you should always do, which is provide the best service and the best product, and make sure that is easily accessible online,” Shawn said.

Behind the Smoke producer and Cali Comfort BBQ team member Cory Wagner said he knew there was potential for some great engagement and interactions to be had with the spotlight on Cali Comfort and the Chargers. As a digital media expert, he knew it was an opportunity to point the attention back on the spirit of Cali Comfort BBQ – fun, food and friends.

“I think this incidence should give business owners more confidence to use social media channels to stand up for themselves,” Cory said. “What stood out to me was the tremendous outpouring of support from everyone. We got so much more positivity and love than we got negative. Cali was so packed (after the publicity) that they hit max capacity, so from a marketing perspective I don’t think we could have done a better job. And for the cost… priceless.”

After the Chargers loss, Shawn and his team packed up a bunch of BBQ and happily made the drive to El Pollo Grill in Bonita to fulfill his end of a much-publicized public bet.

As talked about in the media, East County Eats went live for the delivery on their Facebook page so anyone online could enjoy the fun of it all. Had the Chargers won, El Pollo Grill owner Victor Lopez would have delivered his tremendous tacos to Cali Comfort’s team. Victor was one of the many who stood beside Shawn and helped put an end to the failed smear campaign with the power of positivity.

Along with injecting some fun into the narrative, the bet did a lot of good by raising $1,000 for Jake’s Projects, a local non-profit charity established by the Dave & Jeff Podcast to honor Dave’s son, Jake Palet, who passed away tragically in October of 2018. The local charity aspect of the bet was very important to Shawn, Victor and Kyle Whissel of East County Eats.

“Dave Palet and Jeff Dotseth have been active in the San Diego sports media community for the last twenty plus years, but once they started their podcast last year they refocused their show on what they cared most about in life and the causes that transcend the sports fields. This bet to benefit Jake’s Projects was a win/win no matter the outcome of the game and we are very excited to listen to their plans for the charity in 2019, ” added Walchef.

The lesson: A little friendly rivalry can be fun — and impactful – as long as negativity is left at the door. A BBQ feast delivered straight to your door after a victory doesn’t hurt either. Especially when it’s delivered with a smile, a handshake and a “job well done.”

As the dust settles, and more and more games are won or lost, what remains is a story of business, pride and support. A story that is continuing to be told by the businesses involved and those who believe in them.

“The rising tide lifts all ships, we share, we collaborate, and the community wins” Shawn said.