Congrats to the new Barbecue Hall of Famers (and to the families of those who are no longer with us) Meathead Goldwyn, Ollie Gates, Rodney Scott, Lyttle Bridges Cabiness, and Arthur Bryant.

Chicago, IL — In 2016, Meathead reached over 15 million people with respectable barbecue and grilling information through AmazingRibs.com making it one of the most popular barbecue and grilling resources. His book, “Meathead, The Science of Great Barbecue and Grilling”, released in 2016, made the New York Times Best Seller List along with top 10 lists at Amazon, BBC, Chicago Tribune, Wired, and Epicurious. His website AmazingRibs.com has been nominated for an IACP (International Association of Culinary Professionals) Digital Media Award.

Kansas City, MO — Ollie Walter Gates was born in Kansas City, Missouri to George and Arzelia Gates in 1931. After years of school and joining the Army, Ollie came back to Kansas City and went into the family business at Gates Ol’ Kentucky Bar-B-Q. The decision, in 1956, to build the first “ground up” restaurant, Gates and Sons’s BBQ, heralded the beginning of the Gates’ Barbeque Industry” which exists today.

Charleston, SC — Rodney Scott has been cooking whole-hog barbecue, over wood coals burned down from hardwood, since he was in middle school. For 25 years he worked with his family in their bbq stop in Hemingway, SC until 2017 when he partnered to open Rodney Scott’s BBQ in the North Central neighborhood of Charleston, SC. In their very first year of operation the restaurant was named one the 50 Best New Restaurants by Bon Appetit Magazine and in 2018, Rodney Scott was awarded the James Beard Foundation’s award for Outstanding Chef Southeast.

Shelby, NC — Lyttle Bridges Cabaniss was born in 1916 and had a large family with 9 brothers and sisters. Lyttle lost her father at the age of 8, finished the 3rd grade, quit school, and went to work to help support her family. She worked in a mill for several years until she met her soon to be husband, Elmer Bridges (also known as Red) on a blind date. They married in 1932, had a son who died at age 2 and later adopted daughter Deborah Jane Bridges. It had always been Red’s dream to start his own restaurant, so him and Lyttle opened Dedmons Livestock Barn in 1946. Red trained with Warner Stamey, considered the godfather of Lexington-style barbecue. Red & Lyttle’s restaurant moved several times, until it settled into the longtime location on Highway 74 in Shelby, NC, and changed the name to Red Bridges Barbecue Lodge. Red died in 1966 and left Lyttle to run the business. She spent most of her days at Red Bridges Barbecue perfecting the recipes that have made the restaurant a National standard for pork barbecue. Also known as Mama B, Lyttle is considered by many to be the first female barbecue entrepreneur in North Carolina. She worked until she was 80, and died in 2008 at age 91.

Kansas City, MO — Arthur Bryant came Kansas City to visit his brother Charlie Bryant who was working for barbecue master Henry Perry. Perry offered Arthur a job and he settled in Kansas City in 1931, Charlie assumed control of the barbecue operation in 1940 when Perry died then Arthur took over in 1946 when Charlie retired. Once Arthur was running the operation, he added molasses to sweeten Perry’s vinegar based original recipe to the now legendary sauce and quoted, “I make it so you can put it on bread and eat it.” Now named, Arthur Bryant’s, the restaurant’s popularity grew when Arthur moved it to its current location, just blocks from the Municipal Stadium, which was home of the Kansas City Blues and then the Kansas City Athletics. It was also the first home to the Kansas City Chiefs. As the fan base for the teams grew, and visiting teams and VIPs passed through our city, passion for Arthur Bryant’s Barbecue continued to skyrocket. Then renowned New-Yorker Author, Calvin Trillin declared in Playboy Magazine “…the single best restaurant in the world is Arthur Bryant’s Barbecue at 18th & Brooklyn in Kansas City. Arthur Bryant passed away at the age of 80 in 1982 but his legacy remains.

The BBQ Hall of Fame induction ceremony, presented by YETI, was September 18 during the 2021 American Royal World Series of Barbecue at the Kansas Speedway. The ceremony honored both the 2020 and 2021 classes. 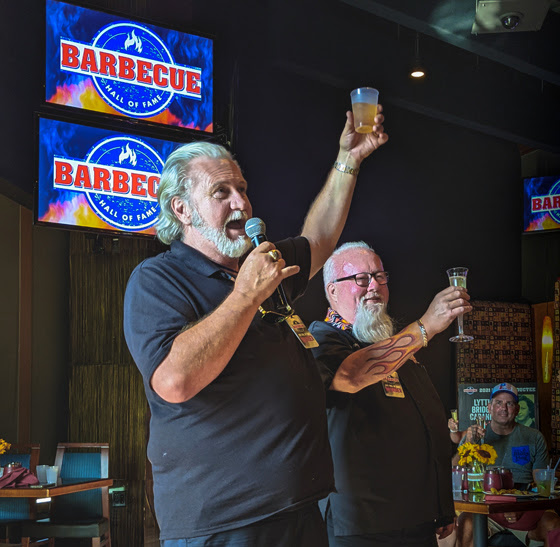 Election into the Barbecue Hall of Fame is barbecue’s top honor and recognizes the significant contributions to the advancement of barbecue. It serves to promote and encourage the growth and public support of barbecue by providing official and public recognition honoring individuals, living or dead, who by extraordinary achievement and service, have made outstanding and significant contributions to barbecue as a hobby, sport, and/or culinary experience.

Each year, three individuals are awarded the prestigious honor and are recognized by the Barbecue Hall of Fame for their significant contributions to the barbecue community and demonstration of achievement in barbecue excellence. Additionally, the Barbecue Hall of Fame Legacy Category honors deceased individuals whose contributions to barbecue excellence helped establish the rich barbecue tradition we enjoy today.

Barbecue is a centuries-old culinary art and this category will recognize individuals whose formative influence came before the modern era of competitions and food media.

-Information from the American Royal Association